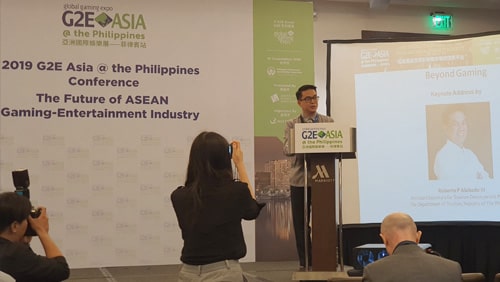 The second day of G2E Asia @ The Philippines kicked off with a discussion of the industry that could make or break the fortunes of integrated resorts (IR): tourism. Department of Tourism (DOT) Assistant Secretary Roberto Alabado the Third delivered the opening keynote address and discussed everything the country is doing to improve its tourism situation.

The first thing Alabado emphasized is that the rehabilitation of Boracay, the Philippines most popular beach destination, isn’t an exception but rather the new rule. The DOT has plans to rehabilitate all of the major beaches, with Siargo, Bohol and Palawan named as up next on the list.

But nicer beaches and new sparkling IRs don’t mean much if tourists can’t get to them. For that, he noted that the DOT is emphasizing the construction of better roads to tourist destinations, and working with the right departments to help with airport development.

As more tourists come in, and from more varied origins, Albada noted that language barriers need to be overcome. For that task, the DOT is attempting to recruit retired overseas foreign workers (OFWs). Filipinos who used to work in China, Dubai, and other destinations who picked up the local language will be asked to help out as interpreters.

One element which he expects to help the Philippines far into the future is its current surplus of tourism graduates. He noted that the Philippines is one of only two countries to produce more than they needed in this vocation, the other being Indonesia, and he expects this will help grow the industry in the Philippines and even other ASEAN countries.

Hoping some of the business leaders in the crowd were fans of adventurous swimming, he also stressed that the Philippines have some of the most notable diving locations in the world, with one such destination just a few hours away from Manila.

Finally, noting that he was attending a large conference, he stressed the Phillipines proud history of MICE (Meetings, Incentives, Conferences, Events) tourism. While other countries have since surpassed the Philippines in this area, he stressed that he hopes to catch up with the competition by the year 2030.

With all the talk of tourism to start off the day, the conference was well prepared to talk about what to do with all of that tourist money for the remainder of G2E Asia @ The Philippines.