The launch of SiGMA 2019, the sixth annual conference in the series, was marked with serious fanfare as it began with Malta Gaming Awards. The ceremony was a very special occasion for this site, as CalvinAyre.com took home the award for Media Agency of the Year. 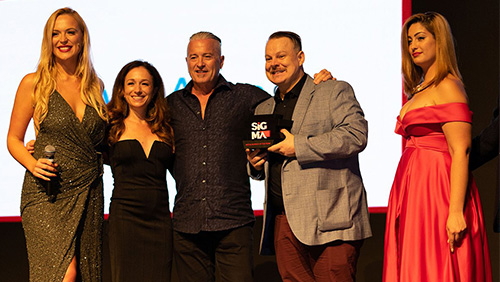 The category, sponsored by HexoPay, awarded “being able to build and sustain a strong link between the brand and its audience through a successful online presence,” while also being able to provide “fully-integrated customer service.” Other nominees were Gambling Compliance and Focus Gaming News.

Accepting the award for CalvinAyre.com were Publisher and Founder Calvin Ayre, Editor in Chief Bill Beatty, and reporter and host Becky Liggero Fontana.

The Malta Gaming Awards have been presented every year since 2016. This is the second year Media Agency of the Year has been awarded. In 2018, the category was won by iGaming Business.

Hosting the event were SiGMA’s Jessica Walter and Jon Thompson. The night began with a speech from SiGMA Group Chief Philanthropy Officer Keith Marshall, who gave a motivational speech to the assembled business leaders:

“If there’s one thing I’ve learnt over the years, it’s that if you want something badly enough you need to reach out and grab it. I’m here to ask each and every one of you to come forward and form an army – an army of justice. This is life. This is not a dress rehearsal – let’s make it count.”

As Calvin Ayre has noted, this sites mission is to allow industry operators, suppliers, and online media experts to discuss the challenges this sector must face, and offer opinions, analysis and insight to help us all face it. To be nominated with the likes of Gambling Complaince and Focus Gaming News was already a huge honor, but to win the category is a tremendous achievement.

As Calvin Ayre noted on Twitter, the years of work that have gone towards this recognition make it all the sweeter:

Satisfying recognition of years of coverage of the online gaming industry for my team and I – Media Agency Of The Year at SIGMA Malta 2019. pic.twitter.com/8F0ck5di4a

Fontana added to the sentiment, noting that it took a lot of people to build towards this achievement:

Bill Beatty noted that while the recognition is nice, hes keeping his eye on the mission. “We stopped worrying about awards a long time ago so this was a pleasant surprise.  A lot of people have done a lot of great work on CalvinAyre.com. It was nice to see that work recognized.”