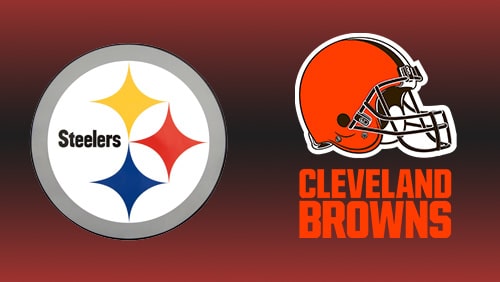 The vast majority of Thursday night games this season have been intra-divisional matchups and that’s the case again to kick off Week 11 as the Pittsburgh Steelers visit the AFC North rival Cleveland Browns, who are 2.5-point favorites. Cleveland is 3-10 ATS in its past 13 home games against AFC North opponents.

Browns players and coaches probably aren’t all that upset that they won’t be facing Steelers quarterback and future Hall of Famer Ben Roethlisberger at all this season. Of course, he was lost in Week 2 to injury. Big Ben grew up in Lima, Ohio, as a Browns fans and had a terrific college career at Miami of Ohio.

In the 2004 NFL Draft, the Browns could have taken Roethlisberger with the No. 6 overall pick but instead took Miami (Florida) tight end Kellen Winslow II. Pittsburgh snapped up Roethlisberger at No. 11 and he’s now a legend in that city with a couple of passing titles and Super Bowl rings. Big Ben essentially never forgave the Browns for that slight and has taken out his frustrations on Cleveland with a 23-2-1 record against the team.

That tie came in Week 1 last year in Cleveland, 21-21, when kickers on both sides missed late chances to win the game. The Browns rallied from down 14 midway through the fourth quarter and at least ended a 17-game overall losing streak. Current Browns starting QB Baker Mayfield didn’t take a snap in the game as he was still a backup. James Conner torched Cleveland for 135 yards rushing and two scores. Pittsburgh then won the home matchup 33-18 in Week 8 to take yet another season series against the Browns. Conner had another 146 yards rushing and two scores.

Few teams in NFL history have made the playoffs after starting 0-3, but the Steelers would be in the postseason as things stand despite starting 0-3 and then 1-4. They won a fourth in a row this past Sunday with a terrific defensive effort in a 17-12 win over the Los Angeles Rams. Cornerback Minkah Fitzpatrick is a Defensive Player of the Year candidate and had a touchdown a second straight week. Pittsburgh was a short dog there and is now 8-1-1 ATS in its past 10 as one. Conner missed the game injured but is likely to return Thursday.

Cleveland temporarily saved its season with a 19-16 home win over the Buffalo Bills to snap a four-game losing streak. Mayfield’s second TD pass, a 7-yarder to Rashard Higgins with 1:44 left, was the winner. That was Higgins’ only catch of the game.