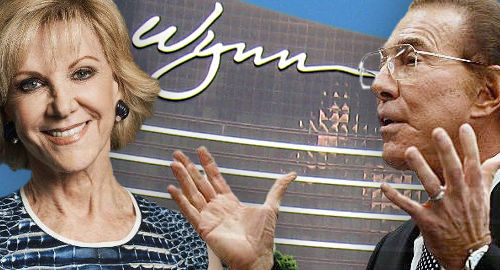 Casino operator Wynn Resorts is accusing its largest individual shareholder Elaine Wynn of engaging in a campaign to smear Steve Wynn, the company’s founder and her ex-husband.

Wynn Resorts is currently defending itself in an invasion of privacy suit filed in Nevada county court by Jorgen Nielsen, a former hairdresser at the Wynn salon in Las Vegas. Nielsen claims Wynn Resorts put him under surveillance after he was quoted in the 2018 Wall Street Journal report that revealed numerous sexual harassment allegations against Steve Wynn.

In a motion to dismiss Nielsen’s suit, Wynn Resorts cited an affidavit from Nielsen’s friend Renee Palleggi, who claimed she received a call from Nielsen a few months before the Journal published its allegations. Palleggi claimed Nielsen told her that Elaine was helping the Journal dig up dirt on Steve and that Palleggi stood to benefit financially for getting on the “winning team.”

Palleggi further claims that Nielsen said Elaine would pay her “a six-figure amount if I would say Steve raped me” and was the father of Palleggi’s son. Palleggi rejected this overture, telling the court that the allegations against Steve “could not be true.” Palleggi said she’d known Steve “for many years and never witnessed any inappropriate behavior by him.”

Wynn Resorts’ Friday filing notes that Nielsen believes his interests “are aligned with those of Elaine Wynn” and that Elaine will benefit from Nielsen’s lawsuit. The company further claims that Nielsen has suffered no harm by any action taken by the company or its top executives.

Elaine has denied allegations that she provided the Journal with a list of 150 women who might have something negative to say about her ex-husband. The Journal has characterized Palleggi’s account of their investigative process as ‘inaccurate.’

Elaine and Wynn’s board have repeatedly clashed in recent years, and while she regained full control over her significant Wynn holdings following Steve’s ouster, her efforts to rejoin the company’s board have yet to bear fruit. That seat seems ever more elusive in the wake of Wynn’s Friday filing.

Steve sued Nielsen for defamation in April 2018 over his comments to the Journal, which stated that salon staff were “petrified” every time they learned that Steve was on his way over to avail himself of the salon’s services. Steve was forced to resign from the company he founded within weeks of the Journal’s original report.

Resigning hasn’t helped Steve or his former company bury the past, as Nevada regulators are currently attempting to revoke Steve’s state gaming license. Nine women who claim to have been Steve’s victims are also suing the company, which has been hit with eight-figure fines in both Nevada and Massachusetts for not being upfront with regulators regarding the complaints.