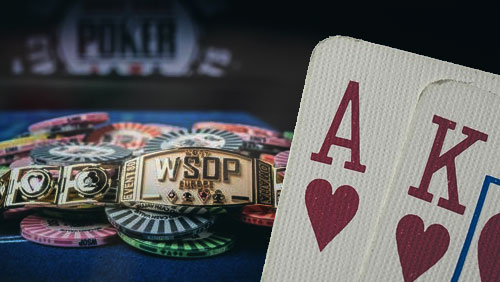 After a titanic battle on the final day of the WSOP Europe Main Event, Greek player Alexandros Kolonias won for €1,133,67 and defeated Claas Segebrecht heads-up to win his first-ever WSOP bracelet.

With 541 entries and a prize-pool of €5,139,500, the €1.1 million top prize was fought over by some of the world’s best poker players. At a stacked final table full of experience, Kolonias didn’t have it all his own way but saw off the competition to claim the title, which had a massive influence on this year’s Player of the Year race, too.

Play entered the final day with three of the final nine on the rail already. With nine countries represented at the official final table, just six countries still had hopes of their player being the last man standing as an all-male cast made up the WSOP Europe final day.

First to lose their seat was the Swedish player, Rifat Palevic, who ran king-deuce into the pocket queens of Anh Do in a blind-on-blind he had little chance of winning. Do’s reward was to leap up the leaderboard, but that wasn’t to last. Having won his seat in the €30 German Poker Master earlier in the year at King’s Casino, the home crowd favourite busted when his pocket queens the second time around couldn’t hold against Dario Sammartino’s pocket jacks.

Sammartino must have thought that, having come 2nd in the Vegas version of the WSOP Main Event, his time was due, but sadly for him, it was not to be. Sammartino was all-in with ace-king, but having already dropped chips to Zinno, Sammartino was at risk against German player Claas Segebrecht’s off-suit jack-ten. A jack in the window killed off Sammartino’s dream, to groans from the rail.

One man who might have been forgiven for inwardly cheering at the loss of such an experience adversary across the table was Anthony Zinno. But after losing earlier in the day with pocket kings against ace-jack to decimate his overnight lead Zinno then lost a coinflip fro 85% of his stack with pocket threes outran by Kolonias with ace-jack.

Zinno managed to play his way back into contention, giving him the cruelty of false hope, as he span three big blinds into twenty. But eventually, he was all-in and at risk again, and his ace-nine couldn’t hold against the hand of the day, jack-ten again, and again for Kolonias.

Heads-up was a lengthy affair, but as the Witching Hour approached on Hallowe’en, a petrifying coinflip for the lot was in the middle, Segebrecht shoving with pocket threes and Kolonias snap-calling with a suited ace-king.

With the air thin in the room with the rails of both men holding their breath, a king on the flop sparked wild celebrations from the Greek supporters, and after a blank turn and river, Kolonias could celebrate becoming the seventh Greek WSOP bracelet winner, but the sole player of that exclusive group to win a million-plus sum in doing so.

While Anthony Zinno and Dario Sammartino will battle on for the Player of the Year title knowing that if they win the final event, The Colossus, and the trio of players above them in Daniel Negreanu, Shaun Deeb and Robert Campbell all fall short, the title will be theirs, it was a day for heroics, and a Greek hero was left the last man sitting with chips in the biggest poker event on the European calendar.