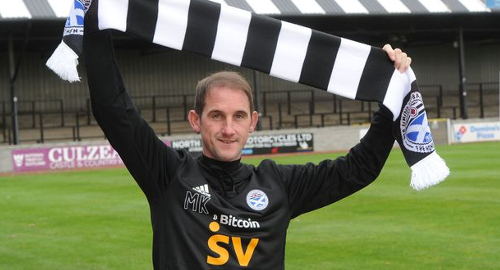 A football player primarily known for his video game play has burnished his real world record by becoming the new manager of Scottish Championship side Ayr United FC.

On Tuesday, Ayr United announced that midfielder Mark Kerr, who joined the team in 2018, would now serve as the club’s new player/manager, replacing manager Ian McCall, who left Ayr in September to serve a similar role at Partick Thistle FC.

The Daily Record quoted Ayr United chairman Lachlan Cameron saying Kerr had been “groomed for management” since his arrival with the club, adding that “the analytical side of the game is something that’s always advancing and he buys into that.” Cameron praised Kerr as “a modern player with modern ideas on how to go about this job.”

Kerr (pictured) certainly has the ‘modern’ bit down, having played a prominent role in the success of the Championship Manager football management simulation video game in the early 2000s. Kerr, whose professional football career began in the 1998-99 season with Falkirk, enjoyed a generous ‘potential abilities’ ranking in the game, leading to his inclusion on many a would-be simulated football manager’s roster.

The ‘modern’ tag also extends to Ayr United’s primary shirt sponsor Bitcoin Satoshi Vision (BSV), the blockchain technology that has proven its capability to become the cryptocurrency sector’s ‘one coin to rule them all.’ The BSV technology has a major supporter in one Calvin Ayre, whose Bodog brand served as Ayr United’s primary sponsor for a number of years.

Commenting on his promotion, Kerr called it an “extremely proud moment” but acknowledged the “great challenge” ahead of him to ensure the club’s solid start to the current season – winning six of its first nine league matches – shows no sign of letting up. Ayr United will meet Championship leaders Dundee this Friday, which as a top of the table clash, will be televised live.