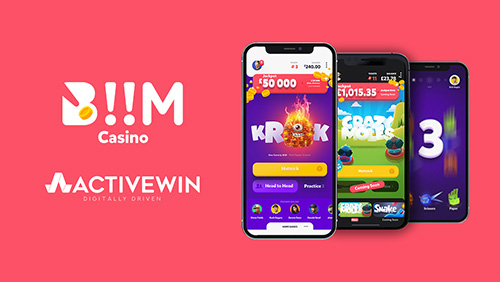 Manchester-based digital agency ActiveWin has secured a contract with the immersive social gaming platform, BiiM Casino. With mobile increasing by 40% since last year, BiiM Casino aims to raise the £13.9bn UK gambling industry standards with the use of an innovative approach.

Maxime commented: ‘We aspire to become a “Netflix”-inspired platform made specifically for the gambling world, which allows customers access to our own games as well as those designed by other developers. We believe in a modern mix of gambling skills and luck, with a social aspect.’

‘We thought the time was right to take mobile gambling to the next level, so we started looking at what people were playing on their devices. The obvious success stories were freemium games such as Angry Birds and Candy Crush, but we added a gambling element. After working for two years on the concept, we wanted to go to market in the right way. ActiveWin seemed the obvious choice, given its outstanding reputation in the industry. It turned out to be a match made in heaven.’ added Michael.

Soon, BiiM will have a jackpot where users gain entry by playing, and there is also now a feature in place which enables friends to play against others in their contacts list. There are three practice games per day for players to get warmed up.

ActiveWin MD Warren Jacobs has built a reputation as an online gambling expert, working with brands including Betfred, Tote, Betable, Nektan, and Foxy over the past six years. Speaking of the latest addition to the agency’s roster, he said: ‘It’s exciting to work on an account as disruptive as BiiM Casino. The team are very serious about their approach to online gambling. Aside from the incredible graphics, they have secured two separate licenses from the UK Gambling Commission; one as a casino operator and one as a software developer. That’s no mean feat, and it tells us that BiiM really knows the latest regulatory and compliance guidelines. So, we are delighted to be working with them.’

BiiM has raised almost £250,000 through crowdcube.com, which far exceeded the initial target of £100,000. The funds have been used to grow the team by adding developers, marketers, and an affiliate program. The first game, “KroK”, is based on the classic Rock, Paper, Scissors game and is currently available on the App Store on the brand new BiiM Casino platform. New games are expected to follow soon, including “Crazy Moles”, a whack-a-mole inspired game, and “Snake”, similar to the famous game many people used to have on their phones back in the day,

Founded in 2018, BIIM Casino is aiming to disrupt the gambling industry by being the 1st UK casino platform to open up to the world of casual gaming. BiiM Casino has created a unique platform that combines the excitement of casinos with the fun of skill games.