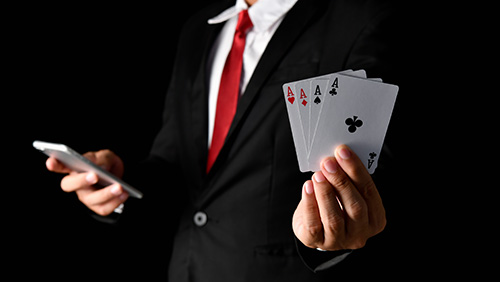 After years in the making, one of television’s most well-known poker broadcasters has released a self-penned poker movie – with a twist.

Vince Van Patten has illuminated the World Poker Tour coverage for many years now, so when he decided to make a poker movie, you might be forgiven for assuming that the focus would be on the felt. But 7 Days to Vegas doesn’t simply restrict itself to poker; it’s all about the hustle, and the life of hustlers. If you’ve ever wanted to watch a movie where a prop bet got out of hand, this might be it.

Van Patten both plays the lead role and co-wrote the film with Steve Alper. Van Patten is Duke Madson, a home game player in Hollywood who is no stranger to big games with private side bets that escalate the action above simply the chips at the felt.

Striking up a rivalry with a director, Madson bites off piece after piece until he’s faced with a prop bet that might be too big to chew – to walk from Los Angeles to Las Vegas in one week.

This being a movie, and with a knowing nod to films such as The Hangover trilogy, nothing is easy for Duke. Setting off in his suit – as per the prop bet’s specifics – Madson sets off, followed by his would-be victims in a pimped-up RV.

There are plenty of big names from the poker table and the Hollywood Hills who make appearances in the film, such as Mike Sexton, Jennifer Tilly, Phil Laak and Antonio Esfandiari from the poker world and Ross McCall, Don Stark and John O’Hurley from television and film.

The film explores the prop bet part of poker lifestyle to its limit, but you don’t need to be a poker pro to know what’s going on – it’ll suit couples where at least one half plays the game to any level, or just movie-goers who enjoyed The Sting back in the day or The Hangover in recent years.

Available on iTunes and Amazon already, you can check out the trailer right here:

Players who attended the glitzy premiere have spoken with passion about the quality of the film, with Todd Brunson eulogising about the movie to his Twitter fans.

Went to the Vegas premier of: “7 days to Vegas” last night. This is a must see for any poker player/gambler. @VinceVanP_WPT really did a great job. Guaranteed gambling cult classic.

Poker commentator Ali Nejad loved the film and was snapped on the red carpet with Phil Hellmuth and other celebrity poker pals.

So proud of @VinceVanP_WPT and his brother Jimmy (w/ the support of @WPT studios et al) for producing a super entertaining movie. #7DaysToVegas screening was awesome & definitely worth a watch even for non poker/ gambling insiders. 👍🏻👍🏻 pic.twitter.com/DNOzcjAAYy

Official reviews have been strong, so it’s not only poker fans who enjoyed the film’s script. Initial reaction from everyone who’s seen the movie has been positive.

7 Days to Vegas (2019) – Rotten Tomatoes 🍅 I like audience score so far ⁦@VinceVanP_WPT⁩ does such a great 👍 job with this film 🎞 go to ⁦@iTunes⁩ a must see https://t.co/f2KLDLM91i

With the film on a strictly limited cinematic release, the film is available on the digital platforms and perfectly suited to a fun night in with friends or loved ones.