LOOT.BET joins forces with the Esports Integrity Commission to combat fraud in esports

[Nicosia, Cyprus – September 25, 2019] – Esports-dedicated bookmaker LOOT.BET and the Esports Integrity Commission officially announce their cooperation. As an ESIC Anti Corruption Supporter and part of its betting alert network, LOOT.BET will provide the organization with internal data for initiating and conducting investigations of suspicious episodes and help it fight match-fixing and betting fraud in esports. 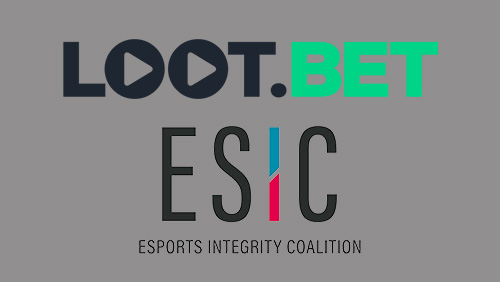 ESIC is a non-profit independent global body that has guarded esports integrity and transparency since 2016. ESIC unites various esports companies and organizations for information and experience exchange, joint confrontation to all kinds of corruption and fraud in esports, and education of the industry participants.

According to ESIC, the number of betting alerts which may be connected to match-fixing, from 2017 to 2018 nearly doubled showing the increase from 39 to 74. To oppose this and other threats to esports, ESIC continuously extends its Members and Supporters list paying great attention to the bookmakers’ community.

The ESIC Commissioner Ian Smith comments, “In reaching our goal which is to make esports as fair as possible, bookmakers play a crucial role since their internal data analysis makes it easier to recognize the signs of a rigged match. We’ve been working in cooperation with LOOT.BET for months by now, and the bookmaker proved their readiness for full collaboration and has already helped us in one of our investigations. We’re glad to officially welcome LOOT.BET as our new Anti Corruption Supporter. We believe that signing the Memorandum of Understanding with them is another step towards the future where esports is free from corruption and fraud”.

Established in 2016, LOOT.BET is a leading esports-focused bookmaker on the market. The company actively supports the industry as a partner of esports studios and operators (StarLadder, Maincast, UCC, etc.) and sponsor of numerous professional events, such as the 2018’s StarLadder StarSeries & iLeague and Invitational series, iBUYPOWER Masters IV, the LOOT.BET/CS, LOOT.BET/DOTA, and LOOT.BET HotShot Series leagues, UCC Summer Smash, etc.

Paul Brel, the Head of Communications at Livestream Ltd, the operator of LOOT.BET, says, “As a major esports bookmaker, we’re deeply interested in high trust not only in our brand in particular but in betting and esports in general. That’s why for us, being a part of the ESIC’s mission in both an honor and in a certain degree a pleasant need. ESIC’s infrastructure, experience, and expertise will help us and the whole industry to more effectively detect match-fixing and protect ourselves as well as our customers from possible harm caused by third party’s illicit activities. Besides, we’re happy to join ESIC as a regular sponsor of esports events since, in this status, we’re standing for those tournaments’ integrity more than anyone else.”