After a marathon final table in Marrakech, Alejandro Roman triumphed heads-up over Silma Macalou to deny the latter what would have been incredible back-to-back victories in WPT DeepStacks Main Events. 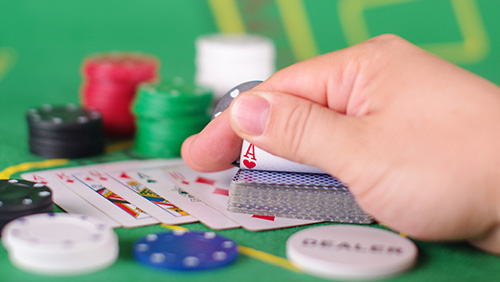 Taking home €103,184 for the win, Roman didn’t have it all his own way across a laborious fight to the title on the final Sunday of the event. The WPT Deepstacks event in Portugal was just a fortnight ago, and on that occasion, Silma Macalou finished 1st out of 432 players to win the €91,655 top prize.

Two weeks on from that victory, Macalou had to settle for finishing 2nd out of 545 players in Marrakech, this time cashing for €72,604 as he narrowly missed out on the second DeepStacks title in the Moroccan city famed for its market and luxury cultural attractions.

Having won in Vilamoura in Portugal, Macalou fell just short of the win after a mammoth 14-hours at the felt. That included eight hours playing from nine down to three, but another five hours of three-handed poker, whereupon the overnight chip leader Pedro Ingles, went from top dog to being put out to the kennel.

It had looked at an early stage that Silma Macalou’s name was written on the trophy all over again, as he rivered a full house to leapfrog Ingles at the top of the chipcounts. It looked like being a duel between the previous event winner Macalou and overnight chip leader Ingles throughout, with the eventual winner Alejandro Roman largely dodging trouble rather than courting it.

With four players left, Ingles was looking extremely good for the win, let alone reaching heads-up, as he had half the chips in play. Sadly for him, he couldn’t hold onto those chips, but he had busted the biggest name at the final table earlier on to get in that position. Ingles busted Bruno Fitoussi when Fitoussi’s pocket tens were overtaken by Ingles’ pocket sevens.

When play became three-handed, it seemed that every time someone was all-in and at risk, they survived. However, it would be Ingles who ended up on the wrong side of variance as players’ stacks were left shallow, and Silma Macalou went into battle against Alejandro Roman slightly ahead.

Just before 5 a.m. local time, Macalou was down to 5.75 million, around 4 million behind Alejandro Roman. Macalou raised with seven-five offsuit and when he hit his seven on the river, he moved all-in and was called by Roman’s club flush.

Macalou may have fallen just short of the incredible, but his feat is still remarkable. To come first then second in back-to-back tournaments is some achievement, and having won around €160,000 in the process, can pat himself on the back for a fantastic fortnight. Spanish player Alejandro Roman enjoyed the latest WPT DeepStacks title win, and with it banked an impressive six-figure score.