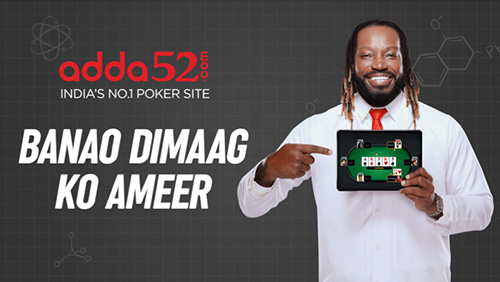 #BanaoDimaagKoAmeer- Research says intelligent guys are better at everything

New Delhi: Adda52.com, India’s largest poker site launches its second brand campaign with brand ambassador Chris Gayle. This new brand campaign comprises of two advertisements which are developed in continuation to the brand thought #BanaoDimaagKoAmeer that proved to be a mega success. The campaign goes live on digital and OOH platforms.

In the campaign, Chris Gayle plays the role of the brand’s voice to deliver the campaign’s message. In both the ads, the protagonist is shown as a regular poker player who achieves glories in life because of the skill set he develops by playing poker on Adda52.com. While the story is narrated, Chris Gayle enters and takes the message forward saying, “Research says intelligent guys are better at everything”.

This marketing campaign addresses the very fact that Poker is a lot more than the limiting perception people carry. Speaking on the launch of the company’s second brand campaign, Naveen Goyal, CEO, Adda52.com said, “Poker has always been considered as an opportunity for winning prizes, but as a market leader in the online poker category, Adda52.com wants to spread awareness about the game and take forward its brand thought #BanaoDimaagKoAmeer. Through the two videos, we want to highlight that poker is not just a game but a value addition to one’s life. It is a game of skill that is played with real people on our platform. Poker is a game which stimulates the mind, helps one take quick decisions, pushes one to be calm and patient to perform well in the game. These aspects also get reflected in their life; thus, the game is indirectly improving one’s life skills. With 2 Million+ registered users, we want to continue to claim the market leader position of being the largest in the country.”

Each of the adverts focuses on the bigger picture of the game being much more than just an avenue of gaining prize money and how this mind sport is an important asset in gaining aptitude and intelligence. With #BanaoDimaagkoAmeer, Adda52.com wants to connect with people from all walks of life and make them aware of the potential poker player in them. The campaign is targeted towards the new users who can play with practice chips for free and win real cash in lakhs. Additionally, the platform also conducts tournaments worth 100Mn+ in winnings every month for the poker players, helping them to play the sport in a more competitive environment.

The first campaign was a grand feat and there was an exponential increase in the number of new depositors which shows there is a revolutionary change in the acceptance level for the game. Also, the overall users who left the platform came back, while the existing users started to play more due to the influx of new users and liquidity in the system. Social media contributed heavily as a channel of awareness in this campaign and hence it will be large on social media.

To learn more, log onto Adda52.com website and learn the game through free tutorials, videos and training material available on the platform. The brand campaign launched by Adda52.com will change the way people perceive poker and will help the game to become a mainstream sport in the country.

Founded in 2011, Adda52.com is the pioneer of online poker in India. With the help of award-winning technology, the same game has been made available across web, mobile and app platforms. Poker is not just any card game, but a game which helps to enhance one’s mathematical and observation skills. Adda52.com, having 2 Mn+ registered users enable users to play the game anytime and anywhere with an insurance of a safe & secure platform. iTech, a world leading testing and certification laboratory for Online Gaming systems has certified the online game to be fair with a reliable and resilient system. Apart from hosting exciting online cash game and tournaments, Adda52.com also organizes the Deltin Poker Tournament which is India’s biggest offline Poker tournament held at Goa and Sikkim. It is also the exclusive Brand License partner for World Poker Tour, an international poker tournament series. Delta Corp Limited, the only listed gaming and hospitality company in India, has acquired the company which owns and operates the online skill gaming portal Adda52.com.