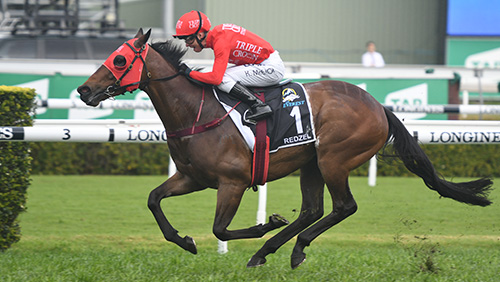 Louisville, KY. 12th September, 2019 – In Australia on Friday night, 18th October, a field of 12 Australian sprint racing stars will line up at Royal Randwick racecourse for the third running of the $14 million (AUD) TAB Everest over 6 furlongs. Creating further anticipation for the world’s richest sprint race on turf is the ‘Climbing Everest’ promotion, which was launched last year by Sky Racing World, the Louisville, Kentucky-based distributor of international horse-racing content and subsidiary of Australian wagering operator Tabcorp.

Redzel has won both editions of The Everest and this year has been paired with TwinSpires, whose nominated charity is Kentucky Equine Adoption Center (KYEAC). Redzel showed he is back to his best and ready for a potential three-peat after winning his third consecutive G3 Concorde Stakes at Randwick last Friday night. The tune-up race saw two other Everest entrants, Pierata and Sunlight, finish in second and fourth, respectively.

At present 8 of 12 horses have been confirmed for The Everest and team Godolphin are yet to announce who will represent their slot. Anticipation is building around the Godolphin decision and after drawing the Godolphin slot in the Climbing Everest promotion, Britney Eurton is eagerly waiting to hear if they opt to go with last year’s third-place finisher Osbourne Bulls or brilliant mare Alizee (by Sepoy).

The horse pairings for the ‘Climbing Everest’ promotion are determined via assigned ‘slot holders’, which refers to horse owners that purchase a slot in the race. Participants received their assignment from the ‘slot holder draw’ held on Tuesday, 3rd September. Participants also received a horse name related to their ‘slot holder’.

Below are the 12 slot holders, horse, along with the corresponding personality and charity.

David Haslett, President and CEO, at Sky Racing World, said: “We’re very excited for the second year of ‘Climbing Everest’ as well as the third year of the TAB Everest itself. It’s a privilege to be part of this great industry and find unique ways to give back to our rich community. TVG will again be broadcasting live from Royal Randwick on Everest day so that North American audiences can enjoy this showcase event from Sydney, Australia”.

For more information on the ‘Climbing Everest’ promotion and terms and conditions visit Sky Racing World.