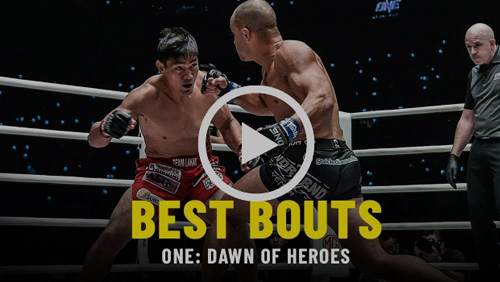 ONE Championship returned to the Mall of Asia Arena in Manila last Friday, 2 August for another explosive night of action. ONE: DAWN OF HEROES, the biggest martial arts event in

Philippine history, electrified the city of Manila with compelling World Championship bouts. Once again, our world-class ONE Athletes came out to showcase their incredible skills.

In the main event, reigning ONE Featherweight World Champion Martin “The Situ-Asian” Nguyen of Vietnam and Australia retained his title with a technical knockout victory over Japanese challenger Koyomi Matsushima.

In the co-main event, Thailand’s Rodtang “The Iron Man” Jitmuangnon unseated former titleholder Jonathan “The General” Haggerty of the United Kingdom to capture the ONE Flyweight Muay Thai World Championship.

These bouts and more featured in this short highlight reel.

ONE Championship’s next show at the Mall of Asia Arena happens this 8 November. ONE: MASTERS OF FATE is poised to be another exciting evening of world-class martial arts action.

Tickets for ONE: MASTERS OF FATE are on sale now at SMTickets.com. Save 25% if you purchase from now until 9 August. Terms & Conditions apply. Offer valid only on Categories 2-4.

About ONE Championship™
ONE Championship (ONE) is the largest global sports media property in Asian history, and the largest producer of millennial live sports content in Asia. Headquartered in Singapore, ONE is the Home of Martial Arts, and is the world’s largest martial arts organization, hosting bouts across all styles of martial arts such as Muay Thai, Kickboxing, Karate, Kung Fu, Silat, Sanda, Lethwei, Mixed Martial Arts, Tae Kwon Do, Submission Grappling, and more. ONE hosts the biggest sports entertainment events across Asia, featuring some of the world’s best martial artists and world champions on the largest global media broadcast in Asia. ONE eSports, a subsidiary of ONE Championship, runs Asia’s largest global eSports Championship Series with some of the biggest blockbuster game titles in the world. In addition to its digital platforms, ONE Championship broadcasts to over 2.6 billion potential viewers across 140+ countries with some of the largest global broadcasters, including Fox Sports, ABS-CBN, Astro, ClaroSports, Startimes, Thairath TV, Skynet, Mediacorp, Great Sports, Tencent, Star TV, Mediaset Italia, ProSiebenSat.1, Dubai Sports, Turner Sports, and more.

Complete card announced for ONE: Warriors of Light in Bangkok on 10 May
Press Releases
18 April 2019
.