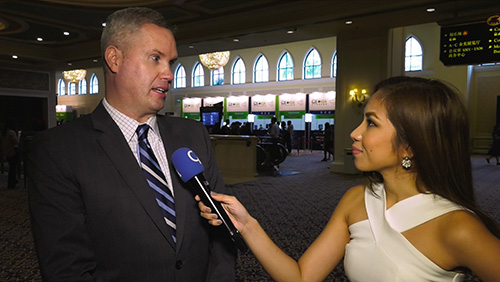 Macau has had a turbulent year, to say the least. Due to many factors, some of which are still in dispute, gross gaming revenue has been up and down, depending on the month. To explain the trends of the gambling mecca, Grant Govertsen, Managing Director of Union Gaming, joined our Steph Tower, and it appears Macau is going through a very significant change.

In a big way, Macau’s player dynamic is changing in a way that it can’t easily reverse. “Obviously, here in Macau, it’s been a tale of two cities, with mass market continuing to be very strong, and VIP almost falling off a cliff,” he noted. “Now, that has been to the benefit of markets like the Philippines, Cambodia, Vietnam, Russia, for example. So what we’re seeing is this example of VIP players leaving Macau for, not necessarily greener pastures, but for different pastures, but for junkets, VIP junkets, its greener pastures because they can actually earn a lot more money in these other jurisdictions, so they’re taking their players overseas.”

Why are junkets choosing other markets? The bottom line is that it’s really about their bottom line. “You got the tax rate in Macau, which is higher than anywhere else, and of course that means junket commissions in Macau are lower than anywhere else,” Govertsen explained. “So, in a very weak economic environment like we’re in now with the softness in China, the junkets really have no choice but to chase higher commission dollars in other jurisdictions. That’s kind of one side of it.”

But that’s not all, other markets are bringing up their game, and VIPs are willing to explore what they have to offer. “Just the quality of these resorts and casinos in jurisdictions outside of Macau is getting better by the day, and so, it gets that much easier to bring a player to one of these other casinos because they’re actually nice,” he said. “So you put those two factors together and all of a sudden, the Macau VIP story gets weak while the VIP story overseas is strong.”

But what isn’t necessarily true is that this is a new phenomenon. “Actually it’s been going on since 2015 when you actually add up the numbers as recorded by the companies,” he explained to Tower. “The official DICJ data says it just happened, but it’s actually almost four plus years now that mass market’s been the leader. The reality is, we expect that to continue.”

That’s not necessarily a bad thing though, and Govertsen believes that Macau will always have the mass market to rely on. “The mass market story in Macau has been exceptionally strong for years now,” he said. He concluded by spelling out why Macau can expect long term profits from those players:

“That’s driven by infrastructure improvements in China, economic improvements in China, and Macau will always be the natural home of that Chinese mass market consumer. That segment remains really robust. VIP, I think we’re going to get to a point where its growing again in Macau, but it will have its ups and downs, it’s just a much more volatile segment. So, when we think about Macau and the mass market story, that’s the engine that’s going to drive Macau over the coming decades, period.”