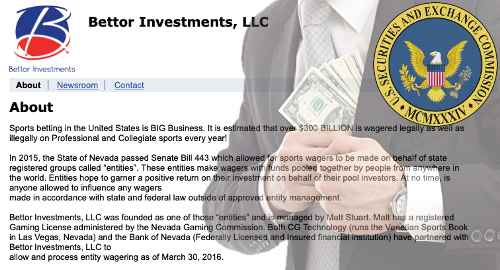 The leader of a defunct Nevada ‘entity betting’ operator has been hit with fraud charges by US security regulators.

On Monday, the US Securities and Exchange Commission (SEC) announced it had charged Bettor Investments LLC and its leader Matthew Stuart with the fraudulent and unregistered offer and sale of interests in a sports betting venture.

In 2018, former clients of the Reno-based Bettor Investments filed complaints against the company with Nevada authorities, accusing Stuart of (a) failing to deliver on his promises to make them rich by placing sports bets on their behalf and (b) taking a powder when they asked for their money back.

In 2015, Nevada approved legislation that allowed out-of-state bettors to fund betting accounts through so-called entity betting operators, which essentially acted as mutual funds for gamblers. These betting ‘investors’ had no say in how wagers were placed but were supposed to share in the bounty that might result from the entity’s pooled wagering successes.

Entity betting never really took off in Nevada and Stuart shut down Bettor Investment in November 2016. But investors who sought the return of their funds were asked by Stuart to accept one-year promissory notes paying up to 14% interest. The maturity date of these notes came and went without any payment to investors, who claimed that Stuart was ignoring their calls and emails.

The SEC’s complaint reveals that Bettor Investment raised about $145,500 from around 70 investors from its March 2016 launch until it imploded. The SEC claims that Stuart misrepresented “numerous significant facts” to his investors, including how much of their money he’d lost making bad sports bets and the fact that he “could not reasonably expect to have the funds necessary” to make good on those maturing promissory notes.

In May, the SEC probed six entity betting funds that were controlled by a pair of individuals who’d previously done time in federal prison for running a Ponzi scheme. The pair reportedly amassed around $1m from would-be sports betting investors who subsequently claimed that their dividends had dried up.