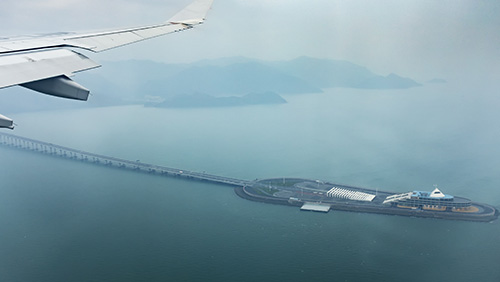 Macau got plenty of infrastructure news on July 4. Secretary for Transport and Public Works Raimundo Arrais do Rosario met with the media and gave them a few important updates about city infrastructure and the upcoming Zhuhai border crossing.

The Qingmao Border, a crossing between Zhuhai in Mainland China province of Gaungdong and Macau, will unfortunately not open this year, Rosario said. Macau Business reported the secretary was correction previous reports that the border crossing would open in 2019. “I had heard about this news, but the completion date on the construction contract is by December 2020,” he said.

He seemingly put some of the blame on mainland China for the extended timetable as well. “We had just received the northern part planning from the mainland on June 28, and we will soon initiate the price quoting and granting procedures within one to two months,” he said. That might have always been the plan, but considering Macau has already started construction on their end, things would be moving faster if China got on top of it.

Still, the delay might end up being good news overall. Macau has had surging tourism throughout 2019 thanks to the new HKZM Bridge. An extra year to prepare for yet another border crossing will give the city time to plan and build for even more visitors.

It also means a new light rail transit (LRT) system will be ready. Rosario told reporters that a section currently under construction between Taipa and Cotai will be ready by December 19. That will help residents and tourists get around the city much easier, lightening the load on the city’s overburdened infrastructure.

That’s been a big concern for several Macau politicians. Facing more tourism than the city was ever designed to handle, a few have put forward the idea of a tourist tax to help fund future development of the city and discourage some visitors. One politician even proposed a hard cap on the number of visitors to the city at any given time; a plan that no one wants to be apart of.