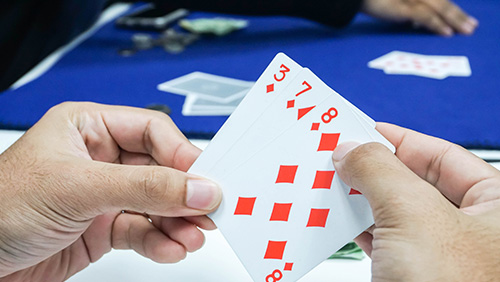 Josephine Cochrane is credited as the first person to design a dishwasher back in 1886.

It’s nice to make a mess, and have a machine clear up after you. It’s also helpful for someone else to remove those errant pubes from the shower, and for someone to juice those apples, cucumber and celery so you can focus on rolling the dice and drinking the stuff.

The higher your status, the more likely you are to hire people or machines to do the things you don’t want to do, so you can focus on the things that bring you value.

Meg-Star International might not be in the dishwashing business, but when it comes to making sure a person with a lot of money and a penchant for gambling needs pampering then world-class pamperers they become.

The Macau Jockey Club is situated next to the Taipa Racecourse, and in February officials awarded the club with a 24-year extension on its horse racing license.

Sticking with Asia, and two former StarCraft pros have moved to poker through deals with J88Poker.

StarCraft, an esport defined as an ‘epic space opera,’ is a Blizzard Entertainment baby that used to be the playground for the likes of Bertrand “ElkY” Grospellier and Lex Veldhuis.

Both players hail from South Korea.

Hong Jin Ho “yellOw” has three ITM finished on his Hendon Mob profile totalling $46,574 with the vast majority of that haul coming after finishing runner-up to Chi Hang in a J88Poker Tour Main Event. ‘yellOw’ also acts, and recently appeared in the Korean reality TV show “The Genius: Rules of the Game.”

J88Poker launched in October 2017 and has quickly become one of the most popular tour brands in Taiwan.

Thanks to Somuchpoker for the scoop on this one.​