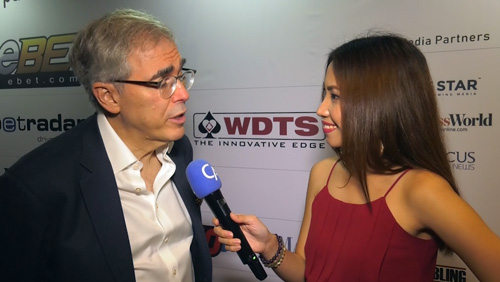 While the gambling industry can be very innovative, it has a lot of little hurdles that must be navigated to really push the field forward. Jay Walker, founder and chairman of Walker Digital, as a prolific inventor and veteran of the industry, knows this better than most. He joined CalvinAyre.com’s Stephanie Tower to share his experience.

As an inventor, Walker has a keen mind for finding solutions to problems, and he shared some advice for other entrepreneurs who might be getting started. “I think all entrepreneurs are, pretty much at heart, very similar, which is, we believe we have a better idea on how to solve a problem for a customer,” he began. “And if you stick to it, more often than not, you can either learn how to eventually solve the customers’ problems, or you realize, it’s not something you’re going to fix, and you need to move on. So my takeaway is, don’t be afraid to fail, it’s a normal part of the process.”

The tricky part that is almost unique to gambling is the strict regulation it must contend with. He explained the dynamic:

“Normally a business has to deal with the problem of creating new products and services, has to retain capital, build software, make a team, right? In the gaming industry, its twice as hard, because we have to not only solve the customer’s problem and the operator’s problem, but we always must solve the regulators problems too. And regulators are cautious, they’re government agencies.”

While regulators must put that strict limit on regulation, operators want to do as much as they can within the boundaries of the law. “The operators are very good at saying ‘Show me a solution to a problem that I’m allowed to put on my floor, and I will,’” Walker noted. “I’ve worked at it for 10 years in the baccarat space, and we now have it so we’re handling hundreds of billions of dollars of baccarat bets more accurately, because no customer wants to have a wrong payment from a dealer, and no operator wants to have a wrong payment. No operator wants to have a dealer who may or may not cheat.”

As innovations like blockchain technology and Internet of Things (IoT) push the industry forward, Walker notes that operators will use those advances anyway they can, and more so in areas that aren’t sensitive to regulation. “What the gaming industry is trying to figure out is, outside of its regulated areas, how can it innovate?” he asked. “So we see much more beautiful gaming palaces, we see better restaurants, we see more shopping, we see better promotions, but we don’t see that much innovation on the gaming floor. It’s pretty much the same, with a slightly new game taking the same random number generator and making it a little bit different. That’s the challenge of the gaming business.”

The decisive factor going forward, as Walker sees it, will be how gambling operators can adapt to the technology we use most. “The big challenge for the gaming industry is in your pocket, right here,” he commented, pulling out his phone. “And for a billion people, or 2 billion people, they’re likely to get their entertainment from the phone. So the gaming industry has to figure out how it’s going to retain its importance as a unique entertainment choice. If it doesn’t incorporate the mobile phone, within a generation, it will be almost irrelevant.”