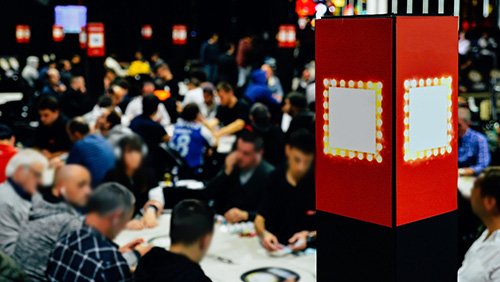 A change of scenery in the Triton Poker Series commentary team, a record-breaking tournament at the King’s Resort in Rozvadov, and Dan O’Brien denies Loren Klein a third Run It Up Main

The live tournament reporter stood alone as the busiest person at the venue. Now there is a bucket to go with the mop. The industry has whetted the appetite of the poker community by providing more extended coverage of events streamed live via the Internet, and that means the tournament commentators no longer have time to wait for the milk in their Coco Pops to turn brown.

When it comes to world-class live streams, the Triton Poker Series is arguably the best in the business right now. At the helm of the delivery vehicle sits Randy ‘nanonoko’ Lew and Lex ‘RaSZi’ Veldhuis, each taking turns to ride shotgun, but there will be two new faces in Montenegro next month.

I’m assuming that Veldhuis has contractual Spring Championship of Online Poker (SCOOP) obligations because the Global Poker Award (GPA) winner sits this one out. Lew, who has no contractual obligations to Stars as he left recently, continues unabated, and Joe Stapleton and David Tuchman join him.

Stapleton is well known throughout poker circles for his work on the PokerStars European Poker Tour (EPT), with Tuchman building his poker resume at the World Series of Poker (WSOP) and more recently as the lead commentator for 888LIVE.

Here is the live stream schedule.

📅 Mark your calendars Poker Fans!
💥 Which event(s) are you most excited watching? Please let us know in the comments below ⬇

The King’s Resort in Rozvadov is a record-breaker.

The low buy-in and massive crowd made it extremely unlikely that the skyscrapers of the poker world would be at the business end of this thing. That’s how it played out with only the fifth place finisher, Danas Dambrauskas, having an ounce of experience at the deep end (Danas won a €300 buy-in event in the same venue back in January dusting down 898-entrants to win the €55,451 first prize).

The final three players decided to cut a deal before going on to play for the trophy. Michael Dajc picked up the most money (€70,350), but it was German, Marius Mikalauskas, who won the thing; his first-ever Hendon Mob flag.

6,368-entrants is impressive, but the King’s Resort owner was nonplussed telling PokerNews that this was only the beginning. Once he gets the team into the gym, Tsoukernik believes he can create a tournament that pulls in 15,000 punters.

Jason Somerville’s Run It Up Reno returned to the Peppermill for the eighth time. 629-entrants competed in the $600 buy-in Main Event, and the popular live tournament grinder, Dan O’Brien took is down after beating Loren Klein, heads-up.

Despite O’Brien’s experience, this was only his third live tournament win amid his $3.4m in earnings. O’Brien has returned to the live scene after a quiet 2018 where he was doing ‘other stuff.’

O’Brien’s victory denied Klein his third RUI Main Event win. His two previous victories came in RUI III (beating 256-entrants for $33,970), and RUI V (beating 424-entrants for $46,300). Klein will brush this one off and head to Las Vegas attempting to win his fourth World Series of Poker (WSOP) bracelet in successive years.

Live Tournament Round Up: Chris Moorman Closes in on his First Major Live Title at the LAPC
Lee Davy
6 March 2014