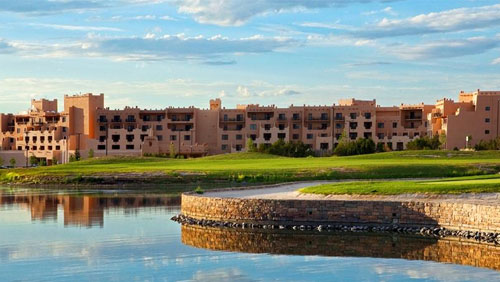 Santa Ana Pueblo launched New Mexico’s first sportsbook in October of last year at the Santa Ana Star Casino Hotel. It got the jump on other tribes in the state and was able to operate as the sole sportsbook in New Mexico—until now. The Pojoaque Pueblo tribe introduced its own sportsbook, and the second in the state, this past Monday. The local market is just starting to pick up and odds are great that additional competition will soon follow.

The sportsbook is being managed through a partnership between the tribe, the owners of National Sports Book Management (NSBM) and South Point Hotel & Casino and is operating from the Hilton Buffalo Thunder Resort & Casino in Santa Fe. It is the largest casino in Northern New Mexico and is the first to offer wagers on both sports and races.

NSBM co-founder John Gaughan will see his other company, Las Vegas Dissemination Company, provide a suit of solutions for the sportsbook and for pari-mutuel races. It will install gambling kiosks and offer hardware and software support and will incorporate technology provided by the Stadium Technology Group.

Since the U.S. Supreme Court reversed the Professional and Amateur Sports Protection Act of 1992 (PASPA) last May, only a few states have already implemented legalized sports gambling, but more are prepared to follow. New Mexico does not have any legislation in place that specifically addresses the activity; however, state lawmakers have interpreted compacts between the tribes and the state as giving the tribes the green light to launch their own sports gambling solutions.

According to New Mexico Attorney General spokesman David Carl, “Sports betting at the Santa Ana Star Casino is governed by the Pueblo of Santa Ana Gaming Regulatory Commission. As such, we will closely monitor New Mexico’s tribal gaming compacts and work with the legislature for proper statutory and regulatory oversight to require responsible gaming and enhanced integrity to create an even playing field for all.”

With two tribes already signed on to offer sports gambling, it’s certainly possible that the market is going to see more competition soon. There are 23 Indian tribes in the state and, of these, 14 own casinos.