Minnesota is getting serious about sports betting now. The state Senate is scheduled to discuss Bill 1894 on March 7, which if passed, would introduce regulated sports wagering, both in casinos and on mobile phones. 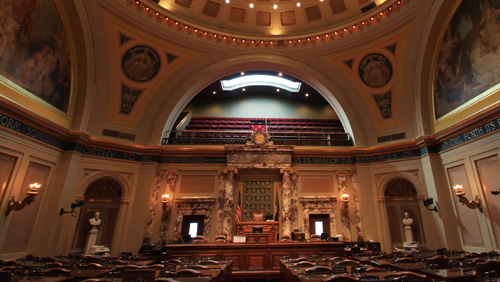 The bill was put forward on February 28 by five senators, with four Republicans and one Democratic-Farmer-Labor party (a party unique to Minnesota, but generally affiliated with the democrats).

The bill is a thorough 13-page document, getting into specific regulations, taxation rules, and even zoning laws. Generally, though, it sets up casinos run by tribes, or racetracks, to offer sports betting, and then for customers to be able to use the internet or mobile devices to continue to do so at home. Only people over 18 would be able to participate, and only on professional or collegiate sports. It specifically also restricts wagering on virtual sports.

The tax laws aren’t too bad for a new market. Operators will pay 6.75% on net revenue, but it does not make clear how much a license would cost.

If the bill passes, it explicitly states in the bill that the law would take effect September 1, 2020.

They won’t have to wait too long for the House to do their part. Representatives Pat Garofalo and Nick Zerwas have already introduced their own sports betting bill. Garofalo said of the effort:

“For too long, Minnesotans wanting to place bets on sporting events have had to rely on an unregulated process. This legislation brings the sports gambling industry out of the shadows and ensures that consumers have the proper protections in place that allow for a fair and transparent experience.”

Minnesota is playing catchup with neighboring Iowa, who have already gotten a bill passed their Senate subcommittee. The midwest is a big place though, so concerns of cross-border traffic creating competition are probably much less than they are on the east coast.

They won’t have to worry too much about neighboring South Dakota either way though. Their Senate bill saw a major set-back, as it suffered a 7-3 defeat in a house subcommittee, and will have to go back to the drawing board.