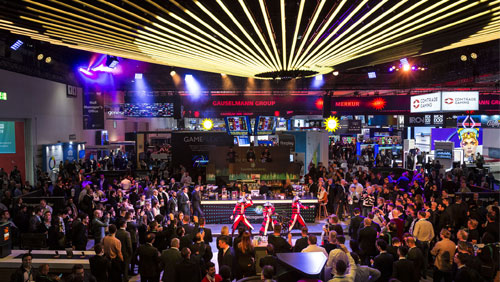 ISLE OF MAN – Japan’s feudal past and cyberpunk future collide in Shogun of Time, the latest online slot developed exclusively for Microgaming by Just For The Win.

Futuristic fortunes abound in the luminous sprawl of Neo Tokyo, where the chrono-hopping quest for epic wins begins. Joining a fearless time-travelling shogun, players will find themselves looking out onto a neon-tinged future Japanese city. The dazzlingly colourful 4×3 reel grid gleams with beautifully rendered symbols depicting cherry blossoms and timeless artefacts, including samurai helmets, armour and antique coins. During the base game, wins are awarded when three matching symbols appear in succession from left to right.

Landing four symbols allows players to dramatically increase their wins with the amazing Reel Split Re-spin feature. Upon successful activation, the cybernetic samurai’s incredible time portal at the base of the grid shudders into life, materialising a brand new fifth reel into the middle of the grid. The new reel offers an additional spin with the other reels locked into place. This eye-popping regeneration allows players to connect some truly rewarding five symbol wins.

Should three or four free spin symbols materialise on any reel in the base game, a gripping free spins round will pull the player through the vortex and into historical Japan, opening a gateway to a plethora of ancient treasures. The game once again transforms, awarding 8 or 16 free spins played on five reels, 243 ways and paying both ways. The titular hero appears on the middle reel as a stacked wild throughout free spins, resplendent in samurai armour and prepared for triumphant wins.

Microgaming unveiled the cyberpunk adventure slot, alongside other big reveals, last week on its show-stopping stand during ICE 2019, held at the beating heart of ExCeL London. The award-winning supplier honoured the game with a trio of samurai warriors amped up by a professional DJ, a sneak preview of visuals of the game, and limited edition merchandise. Watch all the action here.

Leaping through the timelines for temporal treasures, Shogun of Time, the tenth game created by Just For The Win exclusively for Microgaming, is available from Wednesday 13 February. Watch the gameplay video here.

David Reynolds, Games Publisher at Microgaming, comments: “Shogun of Time presents a winning combination of exciting gameplay mechanics and futuristic atmosphere. Just For The Win have delivered another excellent title exclusive to Microgaming, complete with dazzling visuals and an atmospheric, ambient soundtrack, blending traditional Japanese music with pulsating electronica. The rich dynamic features add an extra dimension to the time-travelling slot, transforming the base game and ramping up potential rewards. Pulling an additional reel through the time portal, the game-changing Reel Split Re-spin gives players a great chance to make epic wins, while those chasing free spins will be treated to a trip to Japan’s past, seeing the game transform completely into a five-reel slot with an amazing 243 winning ways and a fixed wild reel.”

Johan Persson, CEO at Just For The Win, adds: “We are incredibly excited to introduce players to the realms of Japan’s past and future in Shogun of Time, our latest title developed exclusively for Microgaming. Players exploring Neo Tokyo can expect a truly timeless adventure. A vibrantly colourful, cyberpunk art style is complemented by exciting mechanics that drastically increase the player’s chances of netting significant rewards. We can’t wait to see players leap into our new world, and experience a double life as a dazzling urbanite and a samurai.”

About Just For The Win

Just For The Win are a software development company creating great gaming content focusing on video slots for mobile and desktop in the free to play and online gambling market. Just For The Win was established in 2016 by developers, game designers and professionals who are some of the most, creative, inspirational and professional in their fields.