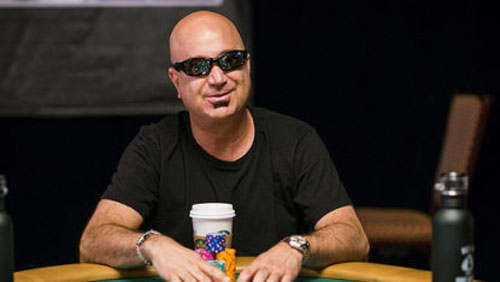 The former poker player and CEO and President of Miral Records, Micah Raskin, pleaded guilty to drug charges in Baltimore and now faces a minimum of five years behind bars.

Some people use scales to weigh almond flour.

Some, to weigh marijuana.

On Thursday, the 50-year-old from New York pleaded guilty to the charge of conspiracy to distribute marijuana in the U.S. District Court in Baltimore.

Police arrested Raskin back in October after his name popped up during an investigation on a prominent Baltimore drug gang. During a search at his home, the police found 10 pounds of marijuana, a loaded shotgun, a taser, $140,000 in cash, Don Corleone style drug ledgers, an old typewriter, an errant pube in the bathtub, and a vase of fresh daffodils. They also found 350 pounds of marijuana in a storage locker, alas Breaking Bad. The word on Marvin’s drug trade grapevine is that 350 pounds of weed is worth more than $500,000.

Raskin chose not to give the waiting press an interview after his hearing. Raskin’s counsel, David Cohen, told all and sundry that he {Raskin} is taking responsibility for his actions. That responsibility comes with a minimum five-years of porridge.

The investigation revealed how Raskin would collect the marijuana from a California-based grower before opening up a Post Office style distribution network stretching to Baltimore, Washington D.C., and Virginia.

It’s believed Raskin distributed hundreds of pounds of marijuana, and wax infused with THC, during his stint as Walter White, and at the time of his arrest, the police confiscated an SUV, 2016 Chevrolet Corvette, and a range of expensive pieces of art.

Raskin, who is the CEO and President of Miral Records, a record label that counts a family band known as The Raskins amongst its recording artists, has won close to $2m in live tournament cashes. Raskin has won six live tournaments including beating 921-entrants to win the $320,231 first prize in a $1650 buy-in event at The Borgata, and $138,119 after conquering a 194-entrant field in a €3,200 buy-in event during the European Poker Tour (EPT) in Berlin back in 2013.

The cops placed a wiretap on Raskin’s phone and collected hundreds of calls and text messages before ceasing the operation as bad beat stories were starting to drive the police insane.

The beak released Raskin under supervision.