After a year in the making, the $25,000 PokerStars Player’s No-Limit Hold’em Championship has finally ended, and a Platinum Pass winner walked away with the $5.1m first prize, with Ramon Colillas beating Julien Martini, heads-up for the title. 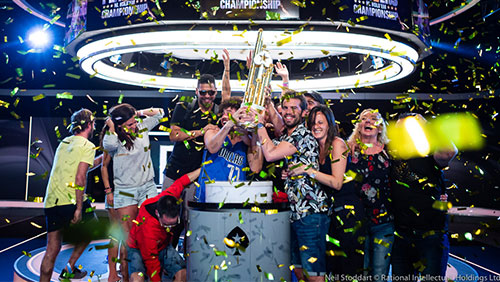 Five years ago, a 25-year-old unemployed man posted on Reddit that he had inherited $25,000, and was looking for some advice on what he should spend it on.

“What crazy stuff can you think of? I am all ears and open to all ideas, except giving it away.”

The advice was the same.

“Pay off your debt.”

As unimaginative as a Beatles haircut.

The lad should have posted the same question on 2+2.

It’s not that people don’t want to play in a $25,000 buy-in poker tournament, but the thought of paying that amount of money to play a game of cards seems as sensible as sleeping in the back garden in the 1960s when you live next door to a man called Albert DeSalvo.

It’s hard to persuade people to do things they think are impossible, and yet PokerStars managed it when they created the $25,000 PokerStars Player’s No-Limit Hold’em Championship (PSPC).

Ever since PokerStars announced the event back in December 2017, everyone who plays poker at a professional or semi-professional level thought about playing in the game at least once, and the high rollers must have been salivating like Pavlov’s dogs at the thought of feasting on so much chum.

The Australian marketing genius, Bernadette Jiwa, once said, “We are aware that we can’t do much of anything alone. We can only create the future we want to see by bringing other people with us on our journey.”

PokerStars didn’t want a high roller to win this thing, and so they created a tribe of 320 people called Platinum Pass Winners, men and women who wouldn’t dream of competing in such a prestigious game and for such a princely sum.

It was the future that PokerStars wanted to see, and one of them made it come true.

The PSPC attracted 1,039-entrants, making it the wealthiest $25,000 buy-in event in the history of the game. It was a jigsaw that contained a piece from every place in the poker community past and present, and after the end of five days of action, only eight remained.

It was an incredibly low key final table when you consider that every high roller worth their salt was in the field, with only the Hedge Fund manager, Talal Shakerchi, regularly competing in events of this magnitude.

Not only did Shakerchi have all of the big game experience, but given his status, he was the only player seated at the final table that wouldn’t baulk at the thought of winning $5.1m because he would likely give most of it to charity. Add that to a recent run that saw him finish fourth in the $50k at the Caribbean Poker Party (CPP) for $299,000, sixth in the $100k at the WPT Five Diamond for $222,000, and fourth in the Super High Roller Bowl V (SHRB) for $1.1m and the only question was – who would stop him?

Or maybe the question should have been – what would stop him?

In the first orbit, Marc Rivera raised to 500,000 from the hijack seat holding KJhh, Julien Martini three-bet to 1,325,000 holding AQss, Talal Shakerchi moved all-in for 5,250,000 holding pocket aces, Rivera folded, and Martini made the call. You couldn’t have picked a better flop for Shakerchi as the Ks3c2h hit the felt, but the Ts and 5s completed the action to hand the Frenchman an unlikely flush to send the Englishman packing. Unperturbed, Shakerchi jumped straight into the $100,000 event. Martini jumped straight onto the throat of his next opponent.

Martini was running away with it.

Then we lost the Canadian grinder, Marc Perrault, and this time someone else held the murder weapon.

From the first position, Ramon Colillas opened to 650,000 holding pocket kings, Martini called from the small blind holding 95o, Marc Perrault was all-in for 425,000 holding 63o. The dealer fanned QJ4r onto the felt, Colillas bet 425,000, Martin folded, and Perrault hit the rail after the 8c and 4h completed the action.

The Spaniard had tasted blood, and the man who nearly climbed into the shower with Jason Koon was the next to become the unfortunate recipient of a Colillas claw hammer.

Jason Koonce moved all-in for 5,300,000 holding T7dd, and Ramon Colillas called and beat him with pocket fives, sending the least experienced player to the rail.

One of the most experienced members of the final table, and the man who came into the final table as the chip leader was next to fall. Once again it was Martini who was doing the shaking and the stirring. 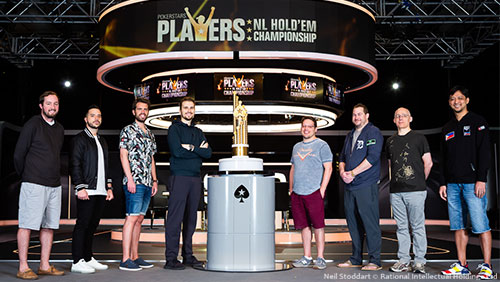 Julien Martini raised to 800,000 from the first position holding KQo, Scott Baumstein moved all-in for 6,625,000 holding Ah9d, and Martini made the call. Baumstein was ahead until the dealer planted a king on the flop, and the turn and river changed nothing.

That exit left Martini with double the chips of Marc Rivera and Ramon Colillas, and he would maintain that advantage going into heads-up after taking down the man from the Philippines who had freerolled his way to a $2.1m finish.

Julien Martini opened to 1,000,000 holding AKo, Marc Rivera moved all-in holding the inferior A3o, and Martini called. The man in the middle scattered the Qs7h2dTsTd across the table and Rivera was out.

Julien Martini moved all-in for 8,900,000 and J9cc, and Ramon Colillas called with A5o. The dealer spaced Ah9d8h a few centimetres apart, strengthening the Spaniard’s lead, and the 2c and 5d brought an end to one of the most incredible tournaments the world has ever seen.

It was an incredible victory for Colillas who before this amazing event had only ever cashed in four live tournaments with no win more significant than $5k. It’s not that the Spaniard was a complete nobody, he had been playing professionally for a decade, but it’s safe to say that without PokerStars creating the group it needed to realise the future it wanted, he would never have played.

What future will PokerStars create next, and how will they develop a group of people who can make it happen?