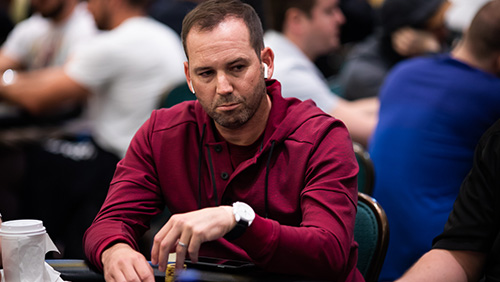 Another report from the PokerStars Player’s No-Limit Hold’em Championship this time an interview with the golfing legend, Sergio Garcia, on the subject of fatherhood.

I’d be crap; likely fall in love with everyone.

The closest I came to experiencing this novel way of picking out a rose petal was this morning. Hidden in the corner of the PokerStars Player’s No-Limit Hold’em Championship (PSPC) tournament room was a series of tables housing people who have risen to the top of their profession.

And, there, sitting opposite me, with dark circles under his eyes coloured in by his 11-month old baby daughter Azalea, sits Sergio Garcia.

I only had five minutes with the golfing legend.

When you only have five minutes to impress someone the last thing you want to do is dampen the mood by talking about their bad beats in a $25,000 buy-in event, so like a true professional, this is where I begin.

“Fortunately, I don’t make my living here,” says Garcia when I ask him if he’s recovered from seeing his aces cracked by David Yan leading to his early Day 1 exit. “It was funny because I started well, and won two or three nice hands, and moved up to 66,000, catching decent cards. Then everything started going the wrong way. I had trips a few times and had runner-runner flushes that beat me. I had aces crushed once. My jacks got crushed. I had aces again {versus David Yan’s queens} – I was hoping he didn’t have queens – I mean, I had a feeling that maybe he could have them, but am I going to get my aces cracked every time I have them? What are the odds against that.”

Oh dear, I have committed the cardinal sin.

Garcia has his driver in the air, and he’s about to knock this bad beat all over the course.

I change links, and suggest that we all become mini-versions of our parents, and given that he’s now a proud father of a baby girl, what are the parts of Sergio Garcia that he’s keen to transfer to Azalea, and what are the pieces he would prefer to be kept hidden beneath the veneer?

He perks up immediately.

I can sense the love like a seagull sense chicken bones in your waste.

“I want her to be a good person,” says Garcia. “Our job is to raise her to be polite and humble. There are spots you want her to avoid. I haven’t done anything too bad like drugs, smoke or drink alcohol in a bad way so in that I am not worried. You don’t want her to go down that path. Our goal is for her to grow up to be an amazing woman – a polite, happy, respectful girl that loves people and tries to make the world a better place. I would love her to do some sports as I think that keeps you away from all the things I mentioned earlier.”

I think if I had longer than five minutes, I could turn Garcia’s waterworks on talking about his daughter. The prodigious golfer, the bride at the aisle, and the inevitable question on what to do about her hot pants phase.

And that’s tough, because Garcia is not a cryer, making his show of emotion during his Ryder Cup points record achievement something worth prodding and poking. What was going on inside his head that produced the tears?

“It was a little bit of a mix,” says Garcia. “I’m not a cryer. It was a mix of getting the record, but more than anything, after having three rough months where things weren’t happening, and to be able to come through like I did, and help the team win the Ryder Cup, and get the points record was like a dream come true. It made me feel proud, not just of myself, but my family, and my team around me. I couldn’t help it.”

Google Sergio Garcia and the God of the Internet tells you that he’s a firebrand. I ask him if he’s found it difficult to separate the emotions at work from his family life since Azalea has been born?

“Nowadays, with the little girl it’s even more important,” says Garcia. “It’s not easy. People say things like, “You have a baby now, so if you have a bad round it makes it feel ok.” It helps, but we are competitors, and we want to do well, so at the end of the day, it’s not like it goes away. You have to take care of it and control it because when you’re with her, you want to be happy. That’s what she sees. If you’re sad, around her, she is going to get sad, and you don’t want her to be like that. We are competitors, and we want to do well. It may hurt you, inside, but you have to put on a good face, and have a good time with her.”

Garcia has that Ryder Cup record and is now a father. I ask him what else is left for him to achieve?

“There are always things you can achieve,” says Garcia. “There are so many things I can still achieve in golf. Like we were talking earlier, raising Azalea the right way is our biggest goal. On golf, the good thing is, you can always improve, so I am working hard on improving, and trying to win as many things as I can, and do the best that I can.”

And then we’re done, and it’s onto the next one.

No kiss, but I think if I see him again, I will get another date.