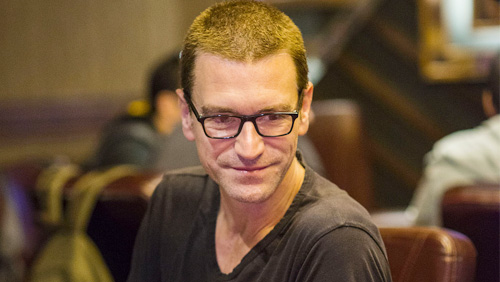 Another piece of work from the PokerStars No-Limit Hold’em Player’s Championship this time an interview with the comedian and poker player Clayton Fletcher on why the chickens cross the road, his love for Joe Stapleton and much more.

The plan was to be there at 11 am, and Clayton Fletcher was there by 11 am. Had he not made the grade as a comedian and poker player, I could have hired him to run my trains when I worked on the iron road.

But he did make the grade, as a comedian.

There is potential for poker.

Fletcher made the final four tables in the 2018 World Series of Poker (WSOP) Main Event, finishing 28th for $230,475, but I sense as much as he loves the game, he would never swap the punchline for poker.

And that’s good news for us.

I ask the man from New York City to share his process for gathering thoughts, feelings and ideas, before loading them into the barrel that once shot is going to knock us to the ground in fits of laughter.

“First, let me say it’s different for every comedian, but my particular process is this: I first decide what I want to say whether it’s funny or not, and then I literally stand in front of an audience and say it, and they let me know whether it’s funny or not. What happens, much like we are doing now – everything is recorded, and after the show, I will go home and listen or watch, and the parts that seem to get the audience going are the parts I will work on as a writer. So first comes improvisation, where I have a general idea of what I want to say, but not the wording, or how it’s going to move from my brain and out through my mouth. The audience lets me know that they’re responding to this part, don’t understand what I am saying on this part, and this part we hear, but we don’t like. As I figure that out I can apply the craft just like any other form of writing – edit, revise, delete, reword, and that’s the process.”

I want to know how he generates his general ideas.

“What’s important to me is everything I am saying I believe, and have a strong emotional attachment to,” says Fletcher. “That doesn’t mean my deepest darkest secrets. More like I have an emotional reaction when I see things in the world, and that will be something I want to talk about. But if I don’t feel anything, and I just find it funny, then it doesn’t make the cut. I have to be passionate about what I am saying. The whole point of stand up is I get to say what I want so I am not going to be a slave to something just because I want it to be funny; I have to want to say it as well.”

Does he schedule an hour a day in his Google Calendar to work on idea generation? Does the muse get out the violin and start playing?

“I never feel pressure to come up with something today,” says Fletcher. “I allow inspiration to strike when it strikes. Sometimes, it happens at the poker table. There are many characters and my whole life I have been around poker, and have a lot of poker experiences to draw from. More often than not I live in NYC, and there is always a lot of crazy stuff going on there. Anything that gets me in the gut – if it frightens me, angers me, or makes me feel good, whatever the emotion is that’s where I have to start.”

Never before in my lifetime have I felt a greater focus on political correctness. It seems no matter what job, career or vocation keeps the torn clothes, and starving dogs at bay, you can no longer be yourself, and the comedy club stage seems a terrifying place.

I ask Fletcher how it’s affected his work?

“It’s a real problem that’s been going on lately,” Fletcher acknowledges. “Comedians have been less inclined to speak their truth in recent years, especially the most famous comedians – they have to watch what they say in an interview because people will take the interview and say this is why you shouldn’t go and see this person’s show. I have a general rule: every joke has a risk factor. If I want to do ‘why did the chicken cross the road’ the risk factor is zero. I may anger a few chickens, but it’s not going to be an issue. If I want to talk about the president, or race or religion or the hot-button topics like abortion, I am taking a much higher risk, and your funny factor has to be commensurate to your risk factor. If I am going to take a chance on a joke that’s going to alienate the audience and make every blogger in the crowd say what a terrible person I am the next day, that joke better be worth the risk.”

I ask Fletcher who is the person who most makes him laugh?

“I hate to say it, but, Joe Stapleton,” says Fletcher. “The guy is hilarious; he cracks me up. We were instant friends the first time he came to do stand up in New York. He emailed me randomly, like, ‘Hey, I see you have a show you produce in New York City, and can I be in it some time, I am a comedian from New York, my name is Joe Stapleton’. I said, “Are you the same Joe Stapleton who does poker commentary, and has been entertaining me for the past ten years,” and he didn’t know I knew him. We have been instant friends ever since and the guy kills me.”

He kills me too.

Why isn’t everyone a comedian?

How did someone like Caroline Aherne make watching a family sitting in the front room watching TV, funny?

“That’s the million dollar question,” says Fletcher. “If we could bottle that and figure out how to make A, B and C funny we would all be amazing comedians. It’s the process of trial and error, and with more experience, I learn there needs to be certain things in place to make the audience laugh. I can give you a couple. Generally speaking, the audience will laugh if what I say surprises them. So if they see where I am going before I get there, they won’t laugh, usually. But if I can manage to get them thinking that I am going in a certain direction, and then suddenly make a sharp turn, that’s usually where the laugh comes from. A good punchline is usually short. If you can say it with one word you shouldn’t say it in three, and some words are funnier than others. One of the funniest words we have ever come up with is the ‘F’ word, and ironically I don’t use it.”

Why the fuck not?

“It’s not how I speak in real life, so it wouldn’t be true to me,” says Fletcher. “As I said earlier, I have to have an attachment to what I am saying, and I am not going to pretend I am this profane guy if that’s not how I am in my everyday life, even though it would be funnier.”

I don’t know why nobody has turned a poker game into a sitcom. The poker table is a fertile breeding ground for gags, but is the comedy club stage a great place to learn some of poker’s tricks and trades?

“The primary skills of being a comedian are reading the audience, understanding who’s who, and what they want from me, and in comedy, I try to give it to them, and in poker, I try to disappoint them,” says Fletcher. “It’s all about what’s going on inside another person’s mind based on body language, facial expressions and general behaviour. It’s really the same skill; it’s just my response to my perception is different at the poker table as it would be at the comedy club. If I am performing, and I see you in the audience, and I feel you want me to talk more about a certain topic because you are enjoying it I will continue talking about it. But if I am using the same skill at the poker table, and I say, ‘He really wants me to fold’, I won’t fold.”

I start to smell of weed.

When I am nervous, it seems my armpits like a drag.

I move the offending pit away from Fletcher’s olfactory zone, and ask him if he feels nervous before he performs?

“I think being nervous is an essential component of a great performance,” says Fletcher. “Think about the times you get nervous before you do an interview. It’s because you want it to go well. And the audience senses there is a heightened emotion going on. I think emotions are extremely important in performing. You have to be feeling something when you’re performing, and the audience feels it too. If they sense that I am nervous, what they are sensing is their response is important to me, and therefore they become more invested in it, because they see I am taking a risk. That’s why we like to watch people walking on the tightrope because we like to watch people who take risks. I think the comedians that get up there, and say, “I have got this,” “piece of cake,” “no problem” – they are doing themselves a disservice, and they are dishonest, and I can’t do that.”

And how does performing make Fletcher feel?

“It depends on the performance. If I do my best, I feel on top of the world. Similar to poker, if I play my ‘A’ game all day long, I feel great even if I end up losing, and similarly, if I give everything I have to a show, I feel great no matter how it goes.”