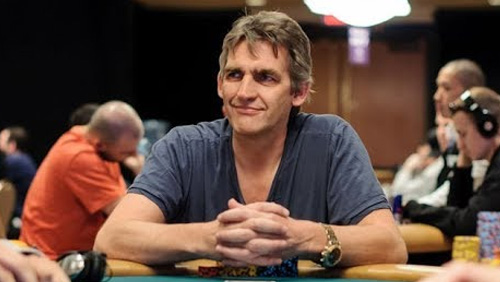 Lee Davy sits down with the President of partypoker LIVE, John Duthie, to talk about Northern self-effacing humour marketing, circuses, amusement parks and much more.

I know I’m going deaf. A specialist told me during a railway medical, many moons ago. And yet, there is only one way to listen to Storm 3000, and that’s so loud you think there’s a bald Turk inside your ear peeling the meat off your drum and turning it into a kebab. And so here I sit, with my breastplate jingling and jangling, a ridiculous trade-off between a musical shot of meth versus the heavy breath of my daughter.

And then, out of nowhere, the voice of Rob Yong pops into my head.

“DTD is a shed on a retail park in Nottingham; there is no beach.”

It’s a line I remember from a blog post he wrote two months ago when sharing his thoughts on the MILLIONS UK at Dusk till Dawn (DTD) being a big disappointment.

It was a line that smashed my wits with baseball bat thuggery. I loved it. It spoke to me, and I believe it also spoke to his tribe.

In essence, the co-hosts of The Fives podcast believed that in calling DTD a shed on a retail park in Nottingham, fewer people would want to travel there to play.

I have a different take.

I’ve said before that every aspect of partypoker, including their false teeth, embodies the Rocky theme.

Any bum can be a champion if given a chance.

The bum had become a champion.

The rest of the competition was lying on the floor amongst the blood, sweat and tears.

And Yong’s tone, words and general all-around demeanour is the reason why.

And not just Yong.

They are all the same.

People who say it as it is.

Speaking to a particular audience in a way that develops mutual trust.

“Talking about DTD being a shed on an industrial estate is just classic Northern self-effacing humour and has no real hidden context within any global marketing strategy,” says Duthie. “Rob, I am sure recognises that compared to some of our other extraordinary locations, DTD is an excellent card-room that happens to be in a warehouse on an industrial estate in Nottingham. It’s not the Bahamas. That’s just realism.”

So Yong, Duthie and the rest of partypoker’s assassins didn’t sit down around a table befitting of Dragonstone to talk marketing tactics only for Yong to pipe up with the DTD Shed theory, but it’s still smart marketing whether consciously or subconsciously created.

When PokerStars sent the Supernova Elite program to heaven without passing GO, something irrevocably broke within poker.

For me, when Yong calls DTD a Shed on an Industrial Estate, it draws me to him, because it shows, not only Northern self-effacing humour but a willingness to tell the truth.

And so people like me will choose partypoker over the competition.

“We are trying to attract everyone who enjoys playing poker. We’re not trying to sell anything other than the opportunity to play well-structured tournaments in beautiful locations.

“When I travel to a tournament I firstly want to know that the tournament is going to be well structured and well attended,” says Duthie. “The guarantees underwrite the attendance, and the structures are developed carefully having spoken to the players themselves. The other smaller but significant things are player experience at and away from the tables. At the tables, it’s all about comfort, experienced dealers and floor staff etc. etc. Away from the tables, it’s about meal breaks being run efficiently and quality of service and food. All these are continuously monitored and optimised.

“New venues always have issues coping with feeding large numbers of players and their partners who all turn up at the same time. We try to help them understand the logistical issues catering to such a large wave of people. We want to provide better value and service for everyone.”

I believe every move we make in life, whether it’s getting a haircut, buying a new pair of shoes, or choosing an online poker site, is connected with status. Every action increases, decreases or maintains the status quo of that status. I ask Duthie how will choosing partypoker LIVE increase our status?

“We are trying to make every event a tailor-made solution so that players feel special,” says Duthie.

And how does their sponsorship strategy tie into influencing status?

“It’s vital,” says Duthie. “The players we have aligned with are consummate professionals with absolute integrity. They don’t just ‘wear the patch’; they are actively involved on a daily basis with everything we do and every decision we make. From schedules and structures to security, they all contribute. It’s is a team effort, and that’s what makes it enjoyable.”

I ask Duthie what people will tell their friends about partypoker, and why? His response gives me insight into a decision to focus on long-term growth versus instant pleasure.

“I hope once people have experienced partypoker that they will tell their friends that we’re trying to get better and better a day at a time, because, hopefully, they want their friends to join them on this journey.”

And we come full circle.

Back to the shed.

The Royal Flush of marketing is word of mouth. People like us do things like this. While poker players have demonstrated an unbelievable ability to play anywhere irrespective of safety concerns, very few are willing to call one place home.

partypoker is fast becoming home for a vast number of people, a day at a time.

A powerful tribe is forming.

And Duthie sees this network effect stretching further than the players.

“Having supportive partners is crucial to our future success,” says Duthie. “It can’t be about the individual; it has to be about the whole. This is a travelling circus, and the Big Top is just wherever we happen to be in any given month. Some are the high-wire act, and others are the clowns, but between us all, we try to put on the ‘Greatest Show on Earth’.

They nailed it in Barcelona for the Grand Final.

Back to Lance and Donnie, and The Fives podcast and both questioned the efficacy of the PPLive$ system versus old-fashioned online satellite tributaries.

I ask Duthie for his thoughts.

“I haven’t listened to their podcast so don’t know what their concerns are,” says Duthie. “Having said that, I can imagine. Managing numbers is probably the trickiest part. In theory, PPL$ are excellent in that they give players the freedom to go where they want and spend them on everything from travel to hotel to buy-ins. The tricky part is knowing or predicting which events players are going to use them for. The Bahamas is top of most people’s lists, but aside from that it’s analysis, and in the beginning, without stats to refer to then it’s going to be hard. I still think they’re a great option though.”

I ask if PPL$ are here to stay.

“Moving forward, I believe you will see a combination of PPL$ and online satellites. We are constantly monitoring the situation, but in principle, it’s a great concept.”

Yong said the same in his Random Thoughts blog post.

“The instant reaction is; ‘We need to go back to locking players in with satellites.’ But long-term, offering players full flexibility is the way forward for building a sustainable and attractive global tour.” Back to my corporate days, if we had failed to hit a company objective like a $10m Guarantee, then someone would be packing their glossy fake leaves into a cardboard box along with the pens, pencils and office mug.

“Our guarantees are competitive and risky, that’s the nature of the beast.” Said Duthie. “Some are going to be missed, and that’s a fact. None of us sees this as a failure; it’s painful, but not a failure. This is a long-term strategy, and there are going to be bumps along the way.”

There was no hint of failure around the Online MILLIONS. Few gave them Bob Hope of hitting the guarantee, especially in the wake of MILLIONS North America and the CPP.

And they nailed it.

Where do they go from here, and what does this mean to the industry as a whole after partypoker ripped the bench from mark and lobbed it through a Bloomingdale’s window?

“I have no idea at all what impact the success of this event will have on the online landscape.” Says Duthie. “It was always going to be the single biggest online MTT ever regardless of whether or not we hit. The guy that came third turned a $5 satellite into over $1,000,000 and that for me tells its own story. The dream is still alive and kicking. I want to think that players will now start to say, actually these guys are making an effort, maybe I’ll give them a shot. Our software gets better and better each time I log in. We won’t stop trying to show players that there is another option, a better option and one that respects them for who they are.”

And what next for partypoker LIVE?

Anymore sheds in the offing?

“Players seem to prefer freezeouts, so the intention is for headline MILLIONS events to now be 10K (local currency) freezeouts combined with an appealing schedule of side events.” Says Duthie. “So no more re-buys and no more multiple starting days. Just pure and simple like the old days. Rio De Janeiro in March 2019 is going to be just incredible.”

And how does being president of the revolution make Duthie feel?

“Honestly, I don’t really like titles and don’t see myself as ‘President’ of anything. As far as feelings are concerned, I’ll quote Bill Hicks:

“The world is like a ride at an amusement park, and when you choose to go on it, you think it’s real because that’s how powerful our minds are. And the ride goes up and down and round and round, and it has thrills and chills, and it’s very brightly coloured, and it’s very loud. And it’s fun, for a while. Some people have been on the ride for a long time, and they begin to question: ‘Is this real? Or is this just a ride?’ And other people have remembered, and they come back to us, and they say ‘Hey! Don’t worry, don’t be afraid — ever — because… this is just a ride.’