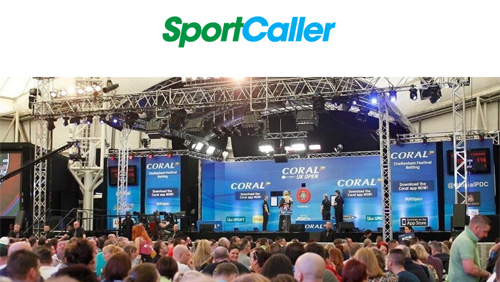 11th December, 2018 – SportCaller, the free-to-play (FTP) sports-game specialist, has stepped up to the oche with Coral to launch a new, easy-to-integrate FTP platform ahead of this week’s PDC World Darts Championship at the Alexandra Palace, London.

After the success of their two free-to-play prediction competitions earlier this year – run across the World Cup and the start of the 2018/19 Premier League campaign – the leading operator was keen re-enlist the pioneering performance of SportCaller in the field of improved acquisition, activity and retention rates.

The first offering on Coral’s £1m Smart Money Series, this World Darts Championship FTP asks players to answer 10 prediction teasers. Players can enter and edit their answers anytime up until 22nd December, as the tournament unfolds and those who successfully answer all 10 answers correctly will share the £100,000 pot.

The Dublin-based FTP and jackpot games provider has now created a simple, light-to-deploy platform which enables clients to easily press its “pop-up predictor” games into the service of any sport or event. This new mechanic allows both operator partners and media owners to roll out their own branded games with speed and flexibility to capture fans’ imaginations.

Coral Head of Product Innovation Tim Dykes said: “Coral’s £1million Smart Money Series kicks off with the darts this month and runs throughout next year – and having collaborated with SportCaller twice already, we’re confident these free-to-play offerings will continue to drive both acquisition and retention in the new year.

“Ideas are the easy bit, bringing them to life is the challenge – and that’s where SportCaller have consistently delivered for us, in terms of slick UX, clean integration and reliable performance.”

SportCaller MD Cillian Barry said: “Having worked successfully with the likes of Paddy Power Betfair, William Hill and bwin over the past few years, we’re excited to keep the ball rolling with Coral on the darts. After founding the free-to-play jackpot model with football and racing, it’s rewarding to see our games’ core values of outstanding gameplay and bet-conversion migrate so effectively across other sports and partners.

“This new, easy-to-deploy platform speaks directly to the heart of account-acquisition and retention. Given the sometimes fickle nature of the modern bettor, significant spends on free bets and sign-up offers make little sense. Instead, FTP games are the first real game-changer in this domain for years.”

SportCaller’s games can all be easily accessed via mobile, app and desktop.