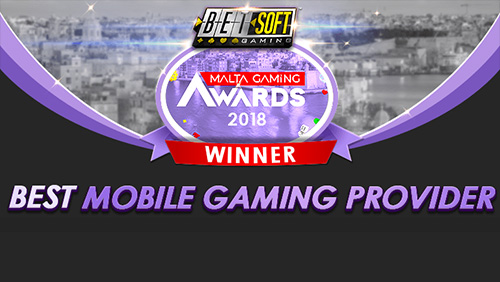 29/11/2018 – Valletta, Malta – For the fourth time in 2018, Betsoft Gaming has been recognised as an industry leader by an independent panel of judges. In the face of formidable competition, Betsoft was named Mobile Gaming Provider category at the 2018 Malta Gaming Awards – a distinction earned through its long-running commitment to seamless cross-platform development.

A highlight of Malta Gaming Week, the awards were handed out as part of a glittering evening of entertainment on Tuesday, 27th November. Mingling with a judging panel made up of representatives from the country’s Gaming Authority, international consultancies, iGaming organisations, and investors, guests came from all over the island to acknowledge the best the iGaming industry has to offer, and to support several Maltese charities.

All ticket proceeds from the evening will be donated to local causes, and a charity auction was held, where Maltese artwork, Fabergé jewellery, and a Portugisier Chronograph reached higher-than-expected selling prices.

As a sponsor and a prominent fixture in the country’s booming iGaming industry, Betsoft was proud to directly support Maltese organisations like The Malta Community Chest Fund, Centru Tbexbix, and the BOV Joseph Calleja Foundation.  Calleja himself, a world-renowned operatic tenor who was born in Malta, also performed during the awards ceremony, as well as comedian Steve Hili, and musician Desi Campbell. Other guests of honour included Maltese President Marie-Louise Coleiro Preca, and blockchain evangelist Brock Pierce.

Awards were given in a total of 29 different categories, covering the full spectrum of online casino content, services, and support. This was not Betsoft’s only award win in 2018. Earlier this year, the company was named Best Casino Supplier at the summer Malta iGaming Excellence Awards, and took home honours from the G2E Asia Exhibition and the 5 Star iGaming Media Awards in 2018. Betsoft’s record-breaking performance throughout the latter half of 2018 suggests that further recognition is likely in 2019 as well.

Betsoft Gaming develops innovative casino games for desktop and mobile. Its portfolio of more than 190 RNG titles reaches players through partnerships with many of the iGaming industry’s leading operators. Under the SLOTS3™ banner, Betsoft is elevating players’ expectations; these cinematic slots blend rapid, gratifying gameplay with an audio-visual excellence more typical of movies and videogames.

Betsoft has held a Class 4 license with the Malta Gaming Authority since 2014. The company’s games and RNG are both independently certified in more than 15 different regulated markets, including Italy, Germany, and Romania.