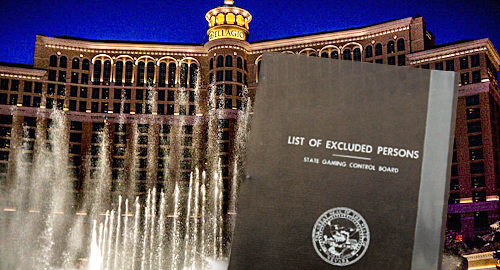 On Thursday, the Nevada Gaming Control Board entered the names of Anthony Grant Granito and James Russell Cooper into the state’s so-called black book, the list of gamblers who are no longer welcome at any Nevada gaming facility.

Granito and Cooper made up half the team that were charged in 2015 with multiple counts of felony cheating and theft stemming from a scam that the four men perpetrated at the Bellagio between July 2012 and July 2014.

The scam relied on Cooper and another Bellagio croupier, Mark Branco, paying out unwarranted winnings to Granito and Jeffrey Martin, based on often indecipherable verbal directions made to the croupiers – so-called ‘hop bets’ – at the moment the gamblers threw their dice. These wagers were then declared to be whatever ended up showing on the dice.

The four perps pleaded guilty in 2015 and the Las Vegas Review-Journal reported Thursday that Branco was the only one of the four who remained behind bars. Granito and Cooper opted against mounting a defense against their black-booking, but Martin reportedly intends to challenge his fate at the next regulatory meeting in December.

It takes a lot to earn a black book designation, as Cooper and Granito are only the 33rd and 34th names to be so tarnished in the state’s decades of legal gaming activity. Most of the original names on the list were reputed organized crime figures, while later additions included known scammers and cheats.

MOHEGAN SUN BLACKJACK DEALER SENTENCED
Up north in Connecticut, the Norwich Bulletin reported that former Mohegan Sun blackjack dealer Ray Mariano was sentenced to five years of probation on Thursday for issuing over $78k in excess payouts to a female gambling accomplice in 2015.

Mariano, who originally pleaded not guilty, reached a plea deal in February that reduced his larceny charges from first-degree to second-degree. His accomplice Marlene Rivera was sentenced to a year in prison in September 2017 due to her previous criminal activity.

Mariano, who’d been working at the Mohegan Sun since the casino opened in 1996, has now been permanently banned from the casino as well as the state’s other gaming venue, Foxwoods Resort Casino.