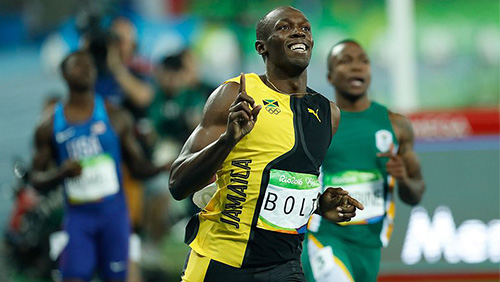 The eight-time Olympic gold medallist, Usain Bolt, scores twice on his professional football debut, as the Central Coast Mariners, beat Macarthur South West 4-0 in a friendly, down under.

When Usain Bolt retired from international athletics in 2017, the world lost one of its legends. The Jamaican track star won eight Olympic gold medals, 11 World Championship gold medals and broke the world records at both 100m & 200m level during his reign as the most magnificent sprinter of all time.

So, what does a 32-year old former athlete do in retirement?

Not this fine specimen of meat.

Usain Bolt immediately put plans in place to achieve his goal to become a professional footballer. Bolt is a keen Manchester United fan and competed at Old Trafford as part of Soccer Aid earlier in the year.

Rumours began to surface that Bolt would join the Red Devils with Betfair offering odds of 16/1, but the move never materialised, and the next thing you know, Bolt joined PokerStars in a deal that saw him feature at the PokerStars Caribbean Adventure (PCA) and starring in a social media promotion with Kevin Hart.

I managed to grab a few words with the legend at the PCA, and he said he’d been training with Borussia Dortmund, and a trial was on the cards. It seems he didn’t do enough to impress Lucien Favre, because this week, Bolt’s name hit the headlines after appearing in a friendly for the Australian A-League team Central Coast Mariners.

And what a debut.

Bolt scored the third and fourth goals in a 4-0 thrashing of Macarthur SouthWest, prompting Bolt to post on Twitter that ‘anything is possible, don’t think limits,’ and that ‘dreams become reality through hard work.’

Bolt has been training with the A-League team since the beginning of October with Coach Mike Mulvey telling the press that the fastest man in the world has ‘rudimentary skills.’

Those ‘rudimentary skills’ include putting the ball into the back of the net, although, my grandma could have scored that second goal, and she lives in a coffin.

Does this mean we are going to be able to play as Usain Bolt on FIFA19?

Despite scoring a brace, and wanting to feature for the club in a full-time capacity, Mulvey is yet to offer the sprint star a contract, and time is running out with the Mariners facing Brisbane Roar in the first game of the season on Sunday.

If Bolt does join the Mariners, he will be up against it. Last season, Mulvey’s team finished at the bottom of the A-League winning only four of their 27 matches, losing 15.

Bolt has also trained with the Norwegian side Stromsgodset and the South African club Sundowns.

Here he is breaking those World Records at the 2009 Berlin World Championships.