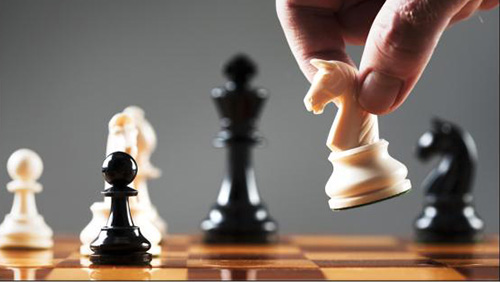 Daniel Negreanu and Liv Boeree may have made names for themselves as top-notch poker players, but they’re going to see how much strategic prowess they have in a different game this Sunday—chess. The two will be participating with two world-renowned players in a promotional chess match designed around PokerStars. They’re coming in with a seriously large handicap, though—

the chess masters will be giving them substantial hints every step of the way.

The “hand and brain” match is a partnership between PokerStars and Chess.com. It was created to promote a PokerStars Platinum Contest that involves both sites. Members of both communities have been submitting ideas for new games that combine chess and chance, and the winner of the contest will be announced during the chess match. The winner will be awarded a Platinum Pass for next year’s PokerStars Players Championship to be held in the Bahamas.

The game is scheduled for Sunday at 4 p.m. US Eastern Time. Negreanu (“hand”) will team up with World Grand Master Jennifer Shahade (”brain”) and Boeree (“hand”) will be partnered with International Master Danny Rensch (“brain”). It is a five-game match and will employ a 10-minute blitz clock with a five-second interval. The match can be seen live on either Twitch.tv/pokerstars or Twitch.tv/chess.

According to Shahade, “PokerStars Play Chess will be a thrilling meeting of the minds,” said Shahade. “During the stream, we’ll be announcing the winner of the #MyChessPokerGame challenge in dramatic fashion, with one of the six finalists eliminated after every game, until we reveal the winner of the $30K PSPC Platinum Pass. This partner chess game is ideal for pairing celebrity aficionados with chess masters: Danny or I will be the ‘brains,’ and announce which piece to move, while Liv and Daniel will pick the specific piece and the square. This results in a lot of laughs and unintended consequences.”

While the poker pros will get some serious help, they won’t be spoon-fed. The “brain” will only say the name of the piece to be moved, not the move to be made. The “hand” must decide on and make the move. If the clock falls under 30 seconds, the “hand” takes over completely.

“As by far the worst poker player in the event, I’m glad we’re playing chess!” said Rensch. “It’s been a true honor to help judge the finalists of the #MyChessPokerGame Platinum Pass Adventure and we hope this is just the beginning of more exciting collaborations between the global chess and poker communities.”