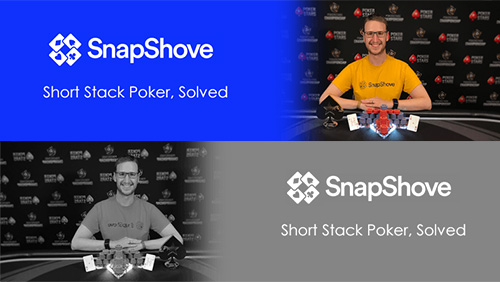 Lee Davy catches up with the World Series of Poker winner, Max Silver, to talk about the marketing efforts (or lack of) behind his poker app, SnapShove.

I once received a smart piece of advice from Bernadette Jiwa, the marketing and brand strategist and author of gems such as Meaningful, Hunch and the Fortune Cookie Principle.

“What companies and entrepreneurs sometimes forget is that the purpose of innovation is not simply to make new, improved products and services; it is to make things that are meaningful to the people who use them.”

A message sewn into the DNA of Max Silver, the World Series of Poker (WSOP) bracelet winner, and founder of the poker app, SnapShove.

“Combines unexploitable nash equilibrium ranges with an instant, easy to use and flexible interface allowing you to get the perfect play for any shove, call or reshove situation.”

Back in the day when I was playing poker with as much grace as an elephant squeezing into a Tommy Hilfiger bikini, I would have loved to own an app that worked these things out for me, because my brain was incapable.

Since creating SnapShove, it’s found its way into the pockets of more than 65,000 people.

How did Silver market his product to gain such traction?

You will be surprised at the answer.

“Towards the end of 2015 I decided to spend significant time improving my short stack game,” Silver told me over an email interview. “I’ve always been a person who likes taking shortcuts in my education whenever possible and had the idea for an app. I assumed something like it would already exist, but after searching high and low, it looked like SnapShove was an original idea.”

I also remember looking Max, but I didn’t decide to create an app.

Why was Max Silver the man to make a difference?

“Other than being in the right place in the right time I feel like I had certain skills which helped me create the best product possible.” Said Silver, “I was able to code the “brain” behind SnapShove relatively quickly and get to work crunching numbers. I focused a lot of the development work on a user interface that would be easy to use immediately with minimal information input. I also had a small name for myself within the poker community, so I was able to market the product with minimum spending effectively.

“I’ve always had an eye on business and had an unfulfilled itch to create a startup from scratch. I realised I probably wouldn’t be playing poker professionally forever and launching my own business has been a great way to learn a variety of skills from marketing, app design, coding and so much more. It is hard work, and while there are certain aspects of SnapShove I find very tedious, other parts of the job inspire me.”

Creating a product is one thing.

Convincing people of its value is another thing entirely.

How did Silver turn his product into a rip-roaring success?

“I’ve done almost no marketing outside of basic social media,” said Silver. “Immediately, I saw the incredible power of word of mouth from having a great product. Poker players are proud to tell other players about SnapShove and from a small launch in Feb 2016 it has snowballed to over 65,000 users.

“I’m sure I’m leaving money on the table by not using other marketing channels, this is something I’m keen to expand on shortly and learn another important marketing skill.”

One of the ten lessons that the marketing genius, Seth Godin, promotes during his Bootstrapping Seminar is to find the smallest viable audience.

Silver has done this well.

As Silver isn’t focusing on millions of people he can obsess about their fears, desires and needs because they are a smaller group. Also, when he looks in the mirror, he sees his perfect customer.

Silver is also a sales force of one; he can’t turn all Nike and reach the masses. But in choosing a niche, he can reach everyone in the ecosystem because people who exist within a small viable audience know each other, and this is how the value of SnapShove has spread through the poker world. As Silver said, “Poker players are proud to tell other players about SnapShove”.

So, SnapShove exists; it’s a success. People love it. But why?

“Players no longer have to spend a large portion of time memorising short stack ranges,” said Silver. “They have an immensely powerful tool in their pocket at all times. It also lowers the skill gap between less experienced and veteran players when it comes to short stack play.”

And how will this change the way people feel about poker?

“Poker has always been a mathematical game, and while some people may feel I’m taking some of the romance out of it I feel that others are relieved that they can now compete on an even playing field,” said Silver. “Whereas before only select pros had shove ranges on their phone, now anyone can.

“I wanted short stack ranges to be accessible to everyone, from the pro’s pro who has been playing professionally forever to the complete amateur competing in his first tournament. One of the biggest demographics that have found utility from SnapShove are the old school pros; they didn’t have online poker or study maths to know these ranges. I’ve had several of the elite old school pros come up to me and personally thank me for making SnapShove, so that was sweet.”

I asked Silver why they should care that SnapShove exists, and he replied they would be leaving money on the table if they didn’t, but how does he know this?

“My slogan “never make a bad shove again” plays heavily on the negative emotions behind making a bad play. In my experience, a negative emotion can often be more powerful than a positive one.”

Once again, Silver’s experience plays a pivotal role. Focusing on the emotions of his target audience is a brilliant idea, but did this come naturally to Silver, or did he read Marketing For Dummies and get the whiteboard out?

“I created a basic mockup of how the app would look and work and shopped it around to several of my close poker friends, the reaction was overwhelmingly positive, and I knew this was a product that I set out to find before making it myself.

“SnapShove is just one of many powerful tools in a poker players’ arsenal, I know many WSOP bracelet and major event winners who frequently use SnapShove, but it’s not my choice to create marketing using their images if they want to promote it they can do it by themselves. Using SnapShove and understanding short stack ranges is going to improve your chances of winning any tournament massively.

“My wife, Lisa, also played a crucial role,” said Silver. “She is one of the smartest people I know with great experience in both the gaming and conventional industries. I wish she was working for me full time!”

Silver told me that he valued honesty and transparency, and always tries to communicate those values to his customers. And that’s important if Silver has plans to move beyond SnapShove.

“There’s a ton of stuff I plan to do with SnapShove,” said Silver. “Users have been very vocal through social media on things they like and don’t like, I’ve made many tweaks over the years, but I know it’s still not perfect. Upcoming features include support for big blind ante and a “grid” mode for the shoving ranges. The priority is our Reshove app which has been in a state of 99% finished for about a year. It should be coming out in the next four weeks.”

Let me into the secret, Max?

“When there’s a raise in front of you it helps to know exactly which cards to shove all in over the top with,” said Silver. “With the help of poker player Ashley Mason, we created a formula that with a few user inputs (or the use of default ranges) we can tell you the exact range you should reshove. It’s not quite perfect as our model doesn’t allow for flat calling, so I think it’s a bit weak out of the big blind especially, yet still extremely useful.”

And without a doubt, if 65,000 people bought SnapShove, a large percentage of them will buy ReShove.

I ask Silver to share his thought process on price.

“We launched SnapShove at 9.99 after much debate back and forth between my wife and me,” said Silver. “Her point was that it’s incredibly expensive for a mobile app which is true, my point was that many poker players are inelastic to pricing so we should go for a more premium price. 9.99 felt like a good compromise, but after the initial strength of sales numbers I decided to up it to 14.99 and have kept it there since. With the power of hindsight, I wished I had priced it even higher, it’s going to add a ton of EV to anyone’s game and even if it were priced at 50 bucks would be well worth it. Reshove pricing will be higher still as it’s a niche addon with a lot of power.”

I finish by asking Silver his general thoughts on marketing.

Back to the smallest viable audience idea, Silver’s responses show how easy marketing can be if you get this one aspect right.

I believe you, Max.

Was there a plan?

“I winged it the whole way.”

Didn’t you create an app, stick it in the store and tweet about it?

You can find everything you need to know about SnapShove, right here.