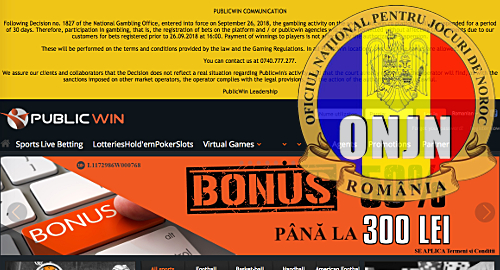 The suspensions were issued on September 18, but didn’t take effect until Wednesday. Neither of the ONJN’s official notices offers reasons for the suspensions.

Sea-Bet received its Romanian online license in August 2017, and while its fixed-odds betting license was valid for 10 years, its online casino license appears to have expired at the end of July.

Publicwin has been ordered not to sign up any new customers or accept any new wagers from existing customers. Withdrawal requests by existing customers are to be honored, and any winnings based on pending wagers must be paid out following the events’ conclusion.

Despite these restrictions, the ONJN notice said that the slot machines in Publicwin’s retail betting shops can continue to operate, pending further notice from the regulator.

Publicwin.ro currently displays a message saying its suspension is to last 30 days. The message also states that the ONJN suspension “does not reflect a real situation regarding Publicwin’s activity,” and that the relevant courts “will find, as with the sanctions imposed on other market operators, [Publicwin] complies with legal provisions, and the action of the [ONJN] is deeply unlawful.”

Romania launched its liberalized online gambling market in 2015, and despite some onerous back-tax demands, managed to attract 23 online licensees as of this April. One year ago, ONJN revoked Stanleybet’s local license due to “unpaid tax liabilities.”