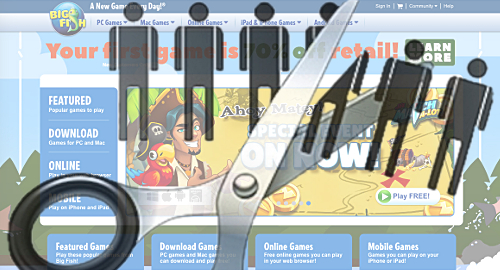 Social gaming operator Big Fish Games is shedding 15% of its staff as it refocuses its efforts on social casino and casual games.

On Tuesday, GeekWire reported receiving an internal memo sent to Big Fish staffers in which the company’s recently appointed managing director Jeff Karp revealed that Big Fish would be “doing fewer things better, to be bigger,” although the latter descriptive doesn’t apply to the company’s payroll.

Karp explained that the company would be “sharping our focus to only develop social casino and casual games,” and thus a number of staffers involved with “the premium business, SkyRocket studio and centralized teams” will need to update their resumes.

The total number of exiting staff has yet to be confirmed, although estimates are around 110 bodies exiting the company’s new Seattle offices. Among those exiting are several vice-presidents – Omar Amin (operations), Kathryn Ficarra (advertising), Steve Galic (engineering), Paul Handelman (licensing) and Pat Wylie (studios). Director of Finance Jina Heverley, a 15-year Big Fish veteran, has apparently decided to retire.

Karp said the remodeled Big Fish would operate four studios, while adding a new publishing vertical to help all games improve in the areas of marketing, product management, ‘operationalizing data’ and brand-building.

Big Fish had experienced a slowdown in recent years, in part due to increasing competition in the social casino space, but also due to continued sluggishness in its premium games division as gamers ditched their PCs for mobile apps. In the first half of 2018, Big Fish reported bookings up 12% year-on-year as daily active users improved 15% to 3.8m.