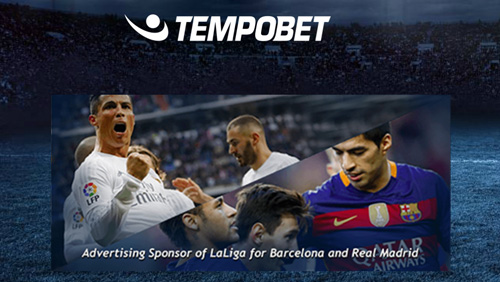 London, 20th September 2018 – Tempobet has renewed its agreement to advertise at both Real Madrid and Barcelona’s away league fixtures throughout the 2018/19 season.

The agreement will see the operator feature on the pitch-side LED boards on television broadcasts outside Spain, throughout Europe and Latin America.

Their branding will be displayed in-game during 34 fixtures, excluding both El Clásico fixtures between the two and when the teams play against Seville.

The six-figure deal is possible thanks to technology which allows perimeter billboard advertising to be digitally modified by territory in order to connect global sport, brands, and local audiences.

Michael Corrado, Managing Director of Tempobet, said the renewal would help with a concerted push to internationalise the brand, whose .com site is available around the globe.

He added: “La Liga is one of the most popular leagues in world football, with particular resonance in Europe and Spanish-speaking LatAm, and we’re thrilled to have renewed our agreement.

“Being able to offer different regions of the world a bespoke advertising experience that underpins our aggressive consumer price positioning, is hugely exciting for us and is just one more step in the rapid global growth of the Tempobet brand.”

The brand is now a fixture among sports fans and is undergoing a rapid growth in multiple territories, a position which has been cemented by a series of high-profile sponsorship deals.

A new report from the casino guide Casino.se: How the new gaming law has affected the Swedish gaming industry
Press Releases
8 hours Ago

FIFA and NBA2K among new games added to Luckbox
Press Releases
9 hours Ago
.