The co-CEOs of Ganapati Group company, GanaEight Coin Limited, met with the Prime Minister of the Republic of Malta, Joseph Muscat, to personally invite him to their G8C launch and share further information about their progress. 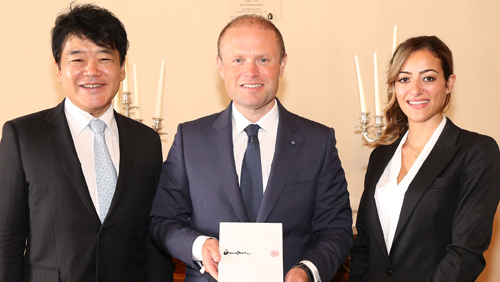 Following a successful first meeting in Japan in July, Mr Hayato Terai and Dr Kristina C. Deguar, the two CEOs of the G8C issuing company, sat down with the Prime Minister, this time in Malta, to hand him a personal invitation to their upcoming launch.

The G8C Token Launch Party is to be held on the 30th of October at the exclusive Palazzo Parisio in Naxxar, and is expected to gain significant attention in Malta.

Terai and Deguara also updated the Prime Minister on the latest developments of their ICO on the run-up to its launch.

The Prime Minister’s reaffirmed his full support for the project, which he recently offered to the Company during their talks in Japan. He welcomed G8C to Malta and expressed his excitement that the country is quickly becoming the Blockchain Island.