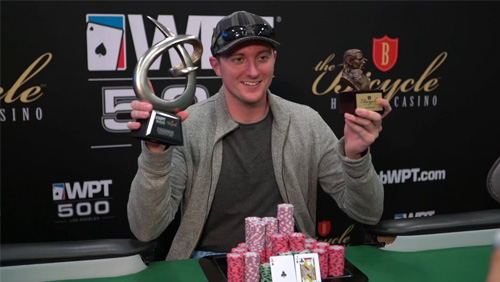 Of course, it’s all relative.

For me, £438 is close to half of my monthly rent. To someone else, it’s peanuts. For poker players, it’s the lowest price point in live poker that can lead to a life-changing sum of money, and you can thank the World Poker Tour (WPT).

The people loved it.

Later that year, Eleanor Gudger defeated a field of 2,133 entrants in the WPT500 at Dusk till Dawn (DTD) in Nottingham, UK.

The people loved it there as well.

Last year, the most beloved tournament format at the lower tier of live poker surfaced in Los Angeles for the first time with Dong Le beating a field of 3,266 entrants to bank the $224,500 first prize.

And this season they returned to the City of Angels, breaking new ground for a WPT500 event, with so many starting flights they were beginning to run out of alphabet (16).

The Bicycle Casino in California played host, and Michael Copeland defeated Jorge Pineda in a short heads-up match to take the $181,950 first prize.

Before his big win, Copeland had only cashed in four live events, lifetime. His biggest score was $1,996, and $580 his most significant outlay.

The Big Blind Ante is Here to Stay

A few days ago, yours truly played in his first live tournament that used the big blind ante system.

I found the move slightly shocking as my stack dwindled, and the stakes increased, but the operation and the effect on gameplay were notably smoother and faster.

Once again, I questioned why live tournament operators hadn’t broad-brushed the changes throughout the globe, and after reading Matt Savage’s latest blog post, I guess things may speed up somewhat.

In the WPT Executive Tournament Director’s latest scribblings he opens up by sharing his initial reservations about the BB Ante after learning that Sean McCormack and Cary Katz had introduced it in ARIA High Rollers.

Savage would try it at the Commerce a year later, and his players loved it, and from there he rolled it out into every No-Limit Hold’em (NLHE) event that bore the Savage stamp.

You can read them all here, but you only need to know point #6.

#6: The bottom line is that BBA is faster and downright better!

Savage also addresses what he coins ‘the one complaint I’ve heard the most’, which is that the BBA is unfair to short-stacks.

“I couldn’t disagree more,” writes Savage before outlining his reasons for dissent.

1. The antes are LESS per round during seven-, eight-, nine-, and 10-handed play and the same at six-handed play in many levels.
2. You don’t have to ante eight out of nine hands in full ring.
3. You can win more when not in the big blind than you can win with individual antes because you win the full ante even if you only have one chip.

The next step for Savage is to bring the BBA concept to the Tournament Directors Association (TDA) Summit due to be held in the ARIA in Las Vegas in the summer.

“The big blind ante is here to stay!” Writes Savage.

I just wish people would hurry up and implement it.