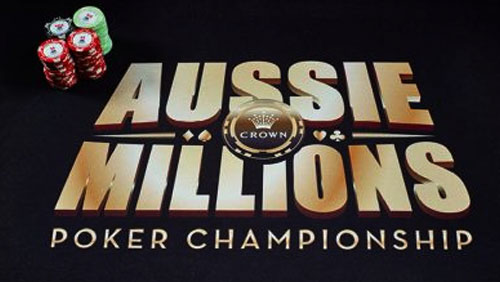 Despite a low turnout for high rollers at the 2018 Aussie Millions, the organisers have added another $25k buy-in event to the schedule this time in the art of Pot-Limit Omaha, and Dominik Nitsche has Sam Greenwood wetting his pants.

Seven years ago, US Special Forces killed Osama Bin Laden, the United Nations declared that the world’s population had breached the seven billion mark, and Erik Seidel went on the heater of the century, winning $6.5m in a calendar year without cashing in the World Series of Poker (WSOP) Main Event.

Today, the modern-day heroes win $6.5m in a single sitting, but back then it was a big deal.

More than any other event on poker’s calendar, the Aussie Millions was the place where High Rollers turned up in their droves. And it wasn’t only Seidel who mopped up. Sam Trickett has won more than $5m playing at the Crown, and Phil Ivey owned the gaff earning close to $8m.

Seidel is still a significant figure in the high roller circuit.

Trickett has his MILLIONS commitments.

And last year, I thought the Aussie Millions High Rollers had exhaled for the final time after the AUD 50,000 Challenge attracted only four entrants, and the AUD 100,000 Challenge looked interesting to just 19. The AUD 250,000 died.

Instead, their offering has grown.

It seems the Crown Melbourne have faith in their high roller fraternity.

The one additional event is an AUD 25,000 buy-in event for Pot-Limit Omaha (PLO) lovers.

A little birdie tells me that Sam Greenwood is on his way to Jeju, and if that’s true, there could be fireworks.

Remember the four entrant AUD 50,000 at the 2018 Aussie Millions, well the person who won that little folly was Mr Greenwood, and he promptly tweeted his disdain for the German vultures who refused to compete in the event Greenwood won.

A few hours ago, in preparation for a potential Jeju Clash of the Titans, Dominik Nitsche tweeted this.

To @SamGreenwoodRIO NEVER, EVER THREATEN TEAM GERMANY AGAIN OR YOU WILL SUFFER CONSEQUENCES THE LIKES OF WHICH FEW THROUGHOUT HISTORY HAVE EVER SUFFERED BEFORE. WE ARE NO LONGER A GROUP THAT WILL STAND FOR YOUR DEMENTED WORDS OF VIOLENCE & DEATH. BE CAUTIOUS!