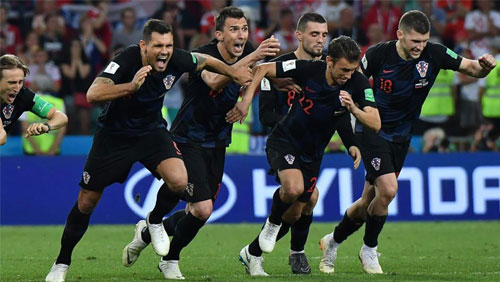 The houseplants are not coming with me. I can’t be bothered taking them to my Mum’s. Rinse, repeat. She takes care of them, I pick them up six months later, and it looks like she has massaged each leaf with chlorophyll. There is a green lantern like glow about them.

Then I slowly kill them.

The irony is my mother and father smoke like chimneys. These plants must have cancer. I bring them to my chilled, Zen-like zone with baskets full of organic fruit and veg and they repay me by wilting.

I get up off my seat.

God Save the Queen bellowing in my ear.

And I throw the lot into the trash.

And that’s how England dealt with Sweden in one of the most boring World Cup Quarter-Finals you’re likely ever going to see.

It was never going to be a classic.

The opening quarter of the match felt like handbags at ten paces. I sat there eating watermelon with my daughter. A far cry from the booze-sodden experience of 1990, the last time England reached a World Cup Semi-Final.

It was like watching a man with an amputated thumb playing that game where you have to pin down the other person’s thumb with your thumb.

England had the same problems.

And then England scored.

Young fired in a corner kick and Harry Maguire, easily England’s best player at this tournament, thundered home a header, his first international goal in ten games, and the eighth set piece goal for England at this tournament.

England dominated from that point on, and Sterling was guilty of missing several gilt-edged chances none more so than when Jordan Henderson put him clear through on goal only to fluff his lines.

Sweden nearly equalised two minutes into the second half when a Marcus Berg header brought a brilliant save from Jordan Pickford. And then Alli showed up for a change. Jesse Lingard fired in a ball to the far stick, and the Spurs midfielder lost his marker to send England into the Semi-Finals.

Sweden had chances, but Pickford was imperious between the sticks.

I fear the only problem England has is they have still not faced a decent side.

And after watching Russia and Croatia in the second Quarter-Final, I think England will have to wait until the final to meet one.

Croatia Break the Hearts of the Hosts

Croatia reached the Semi-Finals for the first time since 1998, after dumping the hosts Russia out of the World Cup on penalties last night.

The lowest ranked team in the world have been a real credit to their nation, but they simply ran out of ideas, gas and eventually luck against a Croatia team who look ripe for a beating.

Lukas Modric and co were impressive against Argentina in the group stages, but have been abysmal against Denmark, and now Russia, needing penalties to go through on each occasion.

The first five minutes of this game was all Russia, buoyed on by fervent support, but it was Ante Rebic who had the clearest chances with a shot and a header.

Then Croatia took control of the football.

Russia looked decent on the counter-attack, but everything always ended at the man-mountain Artem Dzuba.

And then, against the run of play, Denis Cheryshev played a one-two with the man I have just been ripping to pieces before sending a left foot missile into the top corner. It was his fourth goal of the tournament, and only Harry Kane has scored more.

The Russians didn’t have time to celebrate. Within four minutes, terrible defending saw Mario Mandzukic break into the box down the left, and Andrej Kramaric converted his cross.

Ivan Perisic smacked the inside of the post after a goalmouth scramble, early in the second half, as Russia went for it, with Stanislav Cherchesov throwing more forwards onto the pitch. And it was the Russians who looked the stronger side going into extra time.

Then Croatia looked to have won it when Domagoj Vida got on the end of a corner to head the ball home before ripping off his chest to show the world his skinny, pale, xylophone frame of a torso.

Give that man some protein.

Russia secured a free-kick on the edge of the box and Figueira Fernandes, a man who once played for Brazil, but was allowed to play for Russia thanks to a Presidential decree from Vladimir Putin, headed home.

The largest country in the world erupted.

The moon went out of alignment.

For a second, Russia was a Super Power again.

And that’s the way it stayed.

The Russian substitute Smolov stepped up first, and Danijel Subasic saved his tame arse effort with ease. Marcelo Brozovic made no such mistake, firing Croatia into the lead before Alan Dzagoev pulled one back for Russia.

Then hope for Russia as Mateo Kovacic saw Igor Akinfeev dive brilliantly to his left to tip the ball around the post. Only for the extra time hero Fernandes to immediately blaze his hyper-active shot wide of the mark.

Luka Modric saw Akinfeev get a hand to his shot, only for it to strike one post before agonisingly trickling over the line. Sergei Ignashevich showed every minute of his 39-years of experience to ram one home for Russia, but the Croats kept scoring.

Vida drove his shot beautifully down the middle. David Kusayev scored for Russia. And then up stepped Ivan Rakitic – as he did against Denmark – and the Barcelona ace scored the winning goal to send his side into a Wednesday night Semi-Final encounter with England.