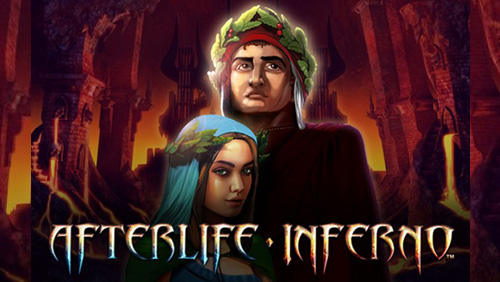 London, UK 19-June-2018: Leander Games is pleased to announce its latest foray into original games development with Afterlife: Inferno which was designed and built in partnership with Ian Sims.

The new game is loosely based on Dante’s Divine Comedy and has a medieval/fantasy look and feel.

Steven Matsell, Chief Executive at Leander Games, says that by working with a slots player and expert such as Sims, his company hopes to introduce a new and exciting approach to game development.

“Afterlife: Inferno is designed by an expert slots player to appeal to other players who like high-variance games with the potential of massive multiplier wins. In partnership with Ian, we have brought together the right maths model and the right hit rates for a specific demographic of player.”

Sims, a former affiliate site owner who started out as a developer, he says he always felt that more could be done to entice players to new games.

“You see so many games that come out and I would say that 90 percent are standard fodder and copies of old slots,” he said. “Most of them don’t try and connect with players like me and captivate us with the right mechanics.”

Sims said the game had also been market tested on the various steaming channels such as YouTube and Twitch. “It is very rare for a new game to grab your attention and make you want to gamble,” he added.

“The main reason you would try a new game is because of how other players are reacting to it. That is why streaming is quite interesting. People can see what the new games look like. Players look for the potential but also the entertainment value of a new game. You don’t get that by just looking at a picture and a theme.”

“The fact that ‘Afterlife: Inferno’ was developed with player input is very interesting to us and makes perfect sense,” said Alexander Tomic, chief executive at SlotsMillion.

“We are seeing a lot of innovative slots coming through but innovation doesn’t necessarily equate to engagement. We think Leander may be on to something – after all, a game that understands how to engage the player will ultimately benefit everyone from the player to the casino and the developer.”

Tomic added that with s short space of time, the game had already proved popular with the players. “We have already seen the game get off to a fast start and within a few days of release, we took the decision to move it into our Featured Slots section which is reserved for the games that really pique player interest.”

Leander Games: Leander Games is an independent gaming company whose mission is to deliver innovative game content to market more quickly than other solutions. The company’s LeGa Remote Gaming Server (RGS) has been developed using the latest technology and making it fast, flexible and scalable. It is accredited and licensed by both the UK Gambling Commission and the Alderney Gaming Control Commission and has the Security Audit ISO 27001. The platform runs with 30 languages and ISO 4217 currencies. Leander’s Game Studio creates high-quality video slots with innovative concepts and feature matched with top quality art and balanced mathematics. Partner games are aggregated to provide operators with the best and most innovative games.