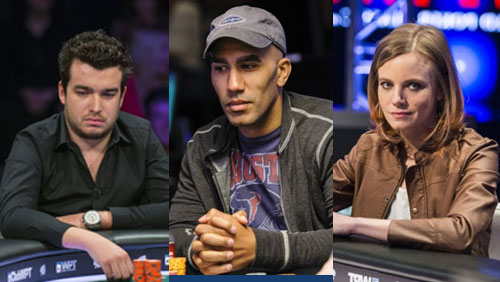 3: Barrels of different spices including Chris Moorman winning a title at the Wynn Summer Classic, Bill Perkins writing a book on why people are wasting their lives, and Cate Hall pondering life without poker.

He signed my first book.

It’s not the reason I took it over to the coffee shop and left it snuggled between Phil Hellmuth’s autobiography and one of Jonathan Little’s volumes upon volumes.

I’m moving, and I don’t have space in my suitcase.

His first book was a decent chew. I don’t have it anymore. John Eames borrowed it and never returned it. I never read the second one. I heard it was about his life, and I prefer to listen to those things straight from the Moorman’s mouth.

And so when I jumped on a jet plane to come to 888Live Barcelona, Chris Moorman, was THE man I wanted to find. I felt I owed it to him for not flicking through his pages. But when I got here, he was gone.

It didn’t take me long to find him.

I woke up the next morning, headed to a little cafe for apple and cinnamon Oats and a Pakistani tea, and when I turned on the laptop, he was there.

I imagine he spends quite a bit of time in the Wynn, as I know it’s a favourite hangout for the grinders.

With close to $15m in online earnings, only time prevents Moorman from becoming a member of the Poker Hall of Fame. Like Phil Hellmuth and his World Series of Poker (WSOP) bracelet record, it’s difficult to see anybody closing the gap this side of a nuclear war.

And the lad is a dab hand in the live arena.

Moorman’s victory in the Wynn was the sixth triumph of his career, including a World Poker Tour (WPT) title and WSOP bracelet on his way to racking up $5.5 million on the old live abacus.

The Brighton born batterer out thumped 242 entrants to win the $55,805 first prize in the $1,100 buy-in, $200,000 Guaranteed event at the Wynn Summer Classic. It signified his first victory of 2018, but he has been banging on the door making final tables at the PokerStars Caribbean Adventure (PCA), partypoker MILLIONS in Barcelona and Montreal.

And the timing is peach perfect.

Last year, he defeated 959 entrants to win the $3,000 No-Limit Hold’em Six-Handed for half a million bucks at the WSOP, and that win will still be wet inside those lips of his.

Can he make it bracelet #2?

He would be one of my picks.

Other pieces of orange rind found in this jar of marmalade were Dylan Hortin (15th), Tom Hall (19th) and Justin Zaki (25th).

Bill Perkins is Writing a Book

One book that won’t end up in a Cardiff coffee shop is the one that Bill Perkins is currently writing.

Back in January, I was fortunate enough to interview Perkins in his Bahamian suite. I took my teenage son with me. He wants to be a millionaire, so I thought, ‘Why not introduce the pair, and see if my boy can pick his brains?’

Imagine, how much more he would learn if Perkins was to lay out his philosophy of success in a book.

Perkins intimated to me in that room that a book was in the offing. PokerNews has just confirmed it.

Perkins told PokerNews that ‘practically all people’ are failing to live up to their true potential, and some may even be ‘wasting their lives.’ He tends to do something about it.

It’s not going to be a quick project.

The PokerNews article suggested chapter previews will arrive in 2019.

Here is another book that I would read, and soon Cate Hall may have time on her hands to write it.

I have only interviewed Hall once. It was a disaster. But there is no doubting that this woman has a lot of absorbing things to say. I would love to take the can opener to her and see what lies inside.

I’m not sure I will ever get the opportunity.

PokerTube scribe, Charles Rettmuller, has heard on the Twitter grapevine that Hall may have had enough of poker.

After a long time away and a short time back, I’m finding it very easy to see how bad poker is for my brain. I guess I should be grateful for the clarity but it still makes me sad to know it’s coming to an end.

Matt Salsberg suggested if her mental and emotional state is not up to it she shouldn’t be playing The COLOSSUS to which Hall replied:

I think I’m going to skip most of the summer, even possible until the Main, and be done with poker after it.

A thought that many, many poker players have, and something worth exploring some point in the future.