Additional bouts announced for ONE: Pinnacle of power set for Macau, China on 23 June

TAGs: ONE Championship, ONE: Pinnacle of power 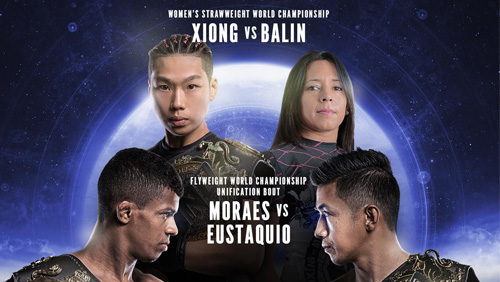 06 June 2018 – Macau, China: The largest global sports media property in Asian history, ONE Championship™ (ONE), has just announced additional bouts for ONE: PINNACLE OF POWER, set for the Studio City Event Center in Macau, China on Saturday, 23 June.

Ticket information for ONE: PINNACLE OF POWER is available at www.onefc.com.

Chatri Sityodtong, Chairman and CEO of ONE Championship, stated: “ONE Championship is absolutely thrilled to be coming back to Macau, and we are excited to host an amazing show at the Studio City Event Center. The entertainment capital of Asia is home to ONE Championship’s most compelling contests, and on 23 June we have an electric card for all martial arts fans. In addition to two blockbuster world title bouts at the top of the card, we have a series of exciting showdowns planned all throughout the night. It’s going to be an incredible evening of action that fans will surely not want to miss!”

“The Panda” Xiong Jing Nan of Shandong, China is the reigning ONE Women’s Strawweight World Champion. With a professional record of 14-1, Xiong began her career competing in professional boxing and was inspired by her father, who imparted in her values of courage and integrity. Featuring a wide array of skills, “The Panda” bagged a gold medal at the prestigious China Open Brazilian jiu-jitsu tournament in 2017. In her last bout, Xiong defeated Singapore’s Tiffany Teo by technical knockout in the fourth round to claim the inaugural ONE Women’s Strawweight World Championship. Up next, the 30-year-old heads to Macau to defend her belt against Laura Balin.

Laura “La Gladiadora” Balin of Argentina is a women’s strawweight contender who will be making her ONE Championship debut at ONE: PINNACLE OF POWER. Balin, who has competed in South America for the entirety of her professional career thus far, will compete for the very first time in Asia. The 38-year-old owns a professional record of 10 wins and two losses. Out of her 10 total victories, nine have come by spectacular finish, including five submissions and four knockouts. For Balin’s first foray in ONE, she will challenge China’s Xiong Jing Nan for the ONE Women’s Strawweight World Championship.

Adriano “Mikinho” Moraes of Brazil is a Brazilian jiu-jitsu black belt with well-rounded striking and grappling skills. He is a two-time flyweight world champion, and one of the most dominant world champions in martial arts. Rarely opposed, Moraes is riding a four-bout win streak, including three wins by submission. After recapturing the ONE Flyweight World Championship last August against Kairat Akhmetov, “Mikinho” successfully defended his title against rising star Danny Kingad last November at ONE: LEGENDS OF THE WORLD. Now, the 30-year-old is set to face ONE Interim Flyweight World Champion Geje Eustaquio in a highly-anticipated title unification bout.

Current ONE Interim Flyweight World Champion Geje “Gravity” Eustaquio of  Baguio City, Philippines, is one of the most skilled martial artists in Asia, and a highly-decorated wushu practitioner. His solid striking and grappling skill set has led to huge victories over the course of a seven-year professional career. Training in the high altitudes of the Philippines’ summer capital, Eustaquio hones his craft alongside his elite teammates at the fabled Team Lakay. In his most recent bout, the 29-year-old thoroughly defeated former titleholder Kairat Akhmetov to capture the ONE Interim Flyweight World Championship. Known for his incredible ability to keep calm in the face of adversity, “Gravity” will look to unify the flyweight world titles when he faces ONE Flyweight World Champion Adriano Moraes.

“The Underdog” Li Kai Wen of Tianjin is the ONE Featherweight Beijing Tournament 2014 Champion and one of the most fearsome young competitors from China. The 22-year-old utilizes his tremendous striking ability and aggression to overwhelm foes with his offense, which has resulted in a series of impressive highlight reel stoppages. In his most recent contest, Li stunned Roel Rosauro with a first-round guillotine choke submission. Equipped with a versatile skill set featuring elements of wrestling, Brazilian jiu-jitsu, and Muay Thai, Li is scheduled to face Filipino newcomer Rodian Menchavez in Macau.

Ev “E.T.” Ting is a 28-year-old martial arts standout from Kuala Lumpur, Malaysia. Living and training out of Auckland, New Zealand, Ting owns a stellar 15-4 professional record, which includes four wins by submission and five by knockout. A winner of six of his last seven bouts, Ting is one of the most talented competitors to come out of Malaysia. In his most recent bout, Ting defeated highly-regarded Brazilian jiu-jitsu black belt Ariel Sexton via split decision. “E.T.” will make his return against another top lightweight contender and former ONE Lightweight World Title challenger, Koji Ando.

Koji “The Commander” Ando is one of Japan’s fiercest competitors, having been a professional martial artist since 2008. The 33-year-old Japanese warrior is never in a boring bout, and always remains a threat no matter the opponent. In his most recent contest, Ando went three gruelling rounds with the hard-hitting Timofey Nastyukhin. With an array of diverse striking skills, coupled with solid submission grappling credentials, Ando is ready to claim victory inside the ONE Championship ring. This time, he battles Ev Ting.

Rui Botelho of Lisbon, Portugal is a Muay Thai practitioner set to make his ONE Super Series debut at ONE: PINNACLE OF POWER. Representing Dinamite Team, the 23-year-old owns a professional Muay Thai record of 17-6-2. Also, he is the former WKA European Champion. Botelho will face Yoshinori Ogasawara.

Yoshinori Ogasawara of Tokyo, Japan is one of the country’s most highly-regarded Muay Thai practitioners. Representing Crosspoint Kichijoji, Ogasawara boasts a professional Muay Thai record of 14-4-4. He is the WBC Japan Muay Thai Champion, and he is known for his mastery of the striking arts. The 26-year-old is set to make his ONE Super Series debut against Rui Botelho.

Former ONE Featherweight World Champion Narantungalag “Tungaa” Jadambaa of Mongolia is one of the top contenders in ONE Championship’s deep featherweight division. At 12 wins and five losses, Jadambaa has faced the biggest names in the sport, and holds notable wins over Adrian Pang, Honorio Banario, and Eric Kelly. A winner of two of his last three bouts, the 42-year-old is making his highly-anticipated return at ONE: PINNACLE OF POWER. This time, the former featherweight kingpin will take on rising talent Edward Kelly.

Edward “The Ferocious” Kelly is one of the brightest featherweight contenders to emerge from the Philippines. The 34-year-old is a complete martial artist who looks to showcase Team Lakay’s world-renowned wushu every time he competes. Kelly has won four of his last five bouts, all by spectacular finish. In his most recent outing, “The Ferocious” shocked the world with a 21-second knockout of Meas Meul, the fastest in ONE featherweight history. Next up, Kelly will take on former featherweight world champion Narantungalag Jadambaa.

Making his ONE Super Series debut is highly-regarded Muay Thai warrior Lerdsila Phuket Top Team. The 37-year-old is known for his technical execution, and his immaculate balance between spectacular offense and iron-clad defense. Lerdsila is a three-time Rajadamnern Stadium World Champion across three different weight classes, and a former WKN, WPMF, and WMC Lightweight World Champion. He owns a 186-31-5 professional Muay Thai record. Lerdsila will try to add another win to his incredible record when he clashes with Sok Thy.

Sok Thy is a 20-year-old striker from Banteay Meanchey, Cambodia. He is a highly-skilled Kun Khmer practitioner, and former Bayon and PNN Stadium Flyweight Champion. With a Kun Khmer record of 221-36-12, Thy is one of the most accomplished martial arts talents from Cambodia. He takes on the legendary Lerdsila in his ONE Super Series debut.

Alain “The Panther” Ngalani, a Cameroon-born martial artist who trains out of Impakt MMA in his home of Hong Kong, has a terrifying combination of power and speed, and is always looking to end matches early. Owning a kickboxing record of 25-7-1 (2 NC), which includes 23 knockouts, Ngalani is a four-time Muay Thai and kickboxing heavyweight world champion. After regularly competing in mixed martial arts, Ngalani is ready to get back to his martial arts roots. The 42-year-old makes his ONE Super Series kickboxing debut against Tarik Khbabez at ONE: PINNACLE OF POWER.

Tarik Khbabez is a professional kickboxer from the Netherlands, and is one of the most popular martial artists in his home country. Training out of Arj Trainingen gym, and with a professional kickboxing record of 42-5-1, Khbabez is the former two-time Heavyweight Superkombat World Champion. Making his ONE Super Series debut, the 26-year-old will take on Alain Ngalani.

“The Southern Eagle” Ma Hao Bin is unbeaten in ONE Championship. Ma, a Chinese national freestyle wrestling champion, made his professional debut in January 2016, where he defeated Wu Ting Shen and Bu Huo You Ga in a single evening of action to claim the ONE Changsha Bantamweight Tournament Championship. Since then, the 24-year-old has strung together an impressive 11-2 professional record, which includes four wins by submission and two by knockout. Ma returns to action in Macau against Danny Kingad.

Danny “The King” Kingad, a premier flyweight talent from the famed Team Lakay of Baguio City, is a wushu champion with a professional record of 9-1. A true warrior from the mountains of the Philippines, the 22-year-old is a tremendous striker who possesses well-rounded grappling skills. In November 2017, Kingad challenged reigning ONE Flyweight World Champion Adriano Moraes, and fell short in his quest of capturing the world title. In his next bout, “The King” moved forward by defeating Bulgarian martial artist Sotir Kichukov via unanimous decision. On 23 June, he returns to action against Ma Hao Bin.

Mario Satya Wirawan of Bogor, Indonesia is former high school football player who became a martial artist. He made his ONE Championship debut in September 2015 against compatriot Sunoto. In December of the same year, Wirawan recorded the fastest knockout in ONE history by stopping Cambodia’s Chan Heng in six seconds with a punch. The 28-year-old Indonesian now returns to action to face Heng’s Cambodian Top Team stablemate Rin Saroth.

Rin Saroth is a martial artist from Phnom Penh, Cambodia. He is a KWC 3 Featherweight Tournament Finalist with a Kun Khmer record of 110-22. He made his ONE Championship debut in December 2015 at ONE: KINGDOM OF KHMER, winning by first-round armbar submission over Mission Ali. Since then, the 24-year-old has improved his skills and gained valuable experience. Saroth makes his return against Mario Satya Wirawan in Macau.

ONE: PINNACLE OF POWER

ONE Championship is the largest global sports media property in Asian history. Headquartered in Singapore, ONE Championship is the home of martial arts and is the world’s largest martial arts organization, hosting bouts across all styles of martial arts such as Muay Thai, Kickboxing, Karate, Kung Fu, Silat, Sanda, Lethwei, Mixed Martial Arts, Tae Kwon Do, Submission Grappling, and more. The world’s most exciting martial arts organization hosts the largest sports entertainment events across Asia, featuring some of the world’s best martial artists and world champions, all signed to exclusive contracts, on the largest media broadcast in Asia. In addition to its digital platforms, ONE Championship broadcasts to over 1.7 billion potential viewers across 136 countries around the world with some of the largest global broadcasters, including Fox Sports, ABS-CBN, Astro, ClaroSports, Bandsports, Startimes, Premier Sports, Thairath TV, Skynet, Mediacorp, OSN, and more.