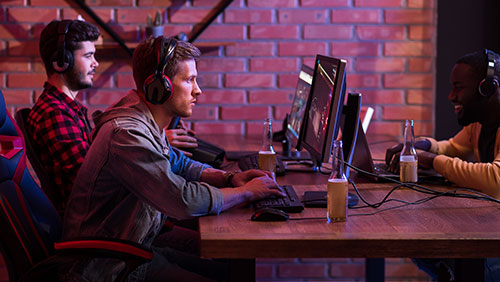 The Swedish state-owned gambling operator Svenska Spel has inked a three-year deal to become the primary sponsor of the Swedish Esports Federation pumping more validity into the burgeoning sport.

We have been so foolish.

While we sit at home counting our pennies, as the wife flicks through the catalogue searching for a top of the range nuclear fallout shelter, it’s not the North Koreans we should have been worrying about.

They have fooled us with their handsome men, beautiful woman, and beautifully flat-packed furniture.

You do not fool me anymore.

The bush of a fox tail is no longer covering my eyes.

I see your plan.

A few weeks ago, the Swedish government issued pamphlets to 4.8 million homes preparing them for war. It seemed an odd move considering the Swedes had not been at war for 200-years, but it’s all making sense.

Today, I learned that Svenska Spel, THE gambling market in the nation, has agreed upon a three-year deal to become the primary sponsor of the Swedish esports Federation (SESF).

Magnus Jonsson, Chairperson of SESF, talked glowingly about Svenska’s Spel sponsorship deal as recognition that esports is ‘being normalised’ in the country, and said he was ‘looking forward to building Sweden’s largest public sporting movement together with Svenska Spel’.

First pamphlets and now training in how to kill terrorists through games like Counter-Strike: Global Offensive (CS: GO). Joakim Mörnefält, Communications Director at Svenska Spel, said in a press release that he was interested in working with a new ‘target group,’ and while you may think that is code for ‘I want to turn all of these esports bods into crazy gambling bods,’ I see it differently.

Mörnefält works for the military.

9.9 million Swedes are his target group.

Soon, all across the globe, strategically located IKEA warehouses, will reveal themselves as terrifying weapons factories, and holding cells for millions of people armed to the teeth with guns, knives and ideas taken directly from CS:GO.

The esports market in Sweden, with Svenska Spel and SESF at the helm, is expected to kick off on January 1, 2019.

But you and I know, that date is far more significant.

War is upon us.

A blonde and bloody war full of boxes.