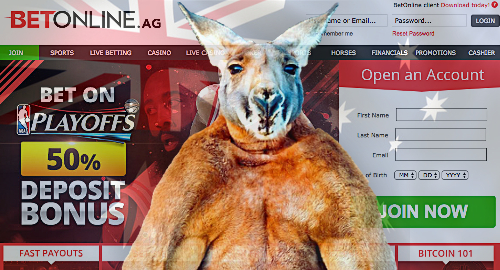 Internationally licensed online gambling firms continue to stream out of the Australian market in response to the new regulatory environment.

Earlier this month, Australian customers of Panama-based BetOnline and Sportsbetting.ag and the Curacao-licensed Tigergaming.com reported receiving emails informing them that the sites would be exiting the Australian market effective April 16.

Customers of the sites have been given until April 30 to withdraw their account balances and the impacted sites’ sign-up screens no longer include Australia as a country option. In addition to sports betting and casino options, the sites belonged to the Chico Poker Network, which is now closed to Australian players. The sites’ affiliate programs, Commission.bz and PartnerEarnings, are similarly done with Down Under.

An email from BetOnline to an Australian gambler indicated that “due to regulatory compliance we no longer accept Australian players.” An email from TigerGaming clarified that the new policy was “due to changes in Australian gaming law and the introduction of the Interactive Gambling Amendment Act.”

February also saw the Australian Communications and Media Authority identify 19 breaches of the new laws and convince many of these offenders to quit the Aussie market before further measures could be taken. It’s unclear whether the above sites were among these identified offenders.

In March, online bookmaker Pinnacle cut off its Aussie customers, giving them until April 20 to withdraw their account balances. Other operators, including The Stars Group’s flagship PokerStars brand, GVC Holdings’ PartyPoker, Kindred Group’s 32Red and 888 Holdings’ 888Poker, made their own Aussie exits last year.

While other jurisdictions have imposed similar online gambling bans, Australia’s new rules feature sharper teeth, including the ability to place online gambling executives on a Movement Alert List that would allow Australian authorities to detain said execs should their planes stray into Aussie air space or make an emergency landing on Aussie soil.