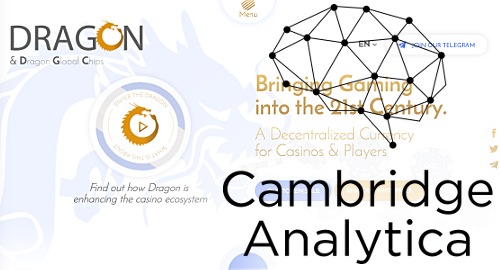 Another infamous name has been linked to Dragon Coin, and it’s a company you might’ve heard of recently.

Cambridge Analytica, the digital data harvesting firm that has been in the news recently for all the negative reasons you can imagine, has found itself in the limelight again. A New York Times report linked the embattled data firm to Dragon Coin’s initial coin offering (ICO) in late 2017.

A quick recap: In October, Hong Kong-based gaming company Dragon Corporation initiated a token crowdsale to raise $500 million and bring blockchain to Macau. Proceeds from the ICO would go towards the development of the 1,600-square meter floating Dragon Pearl Casino Hotel.

While the Dragon Corp. executives were glad-handing and posing for publicity photos with figures like former 14K Triad leader Wan ‘Broken Tooth’ Kuok Koi at the Dragon Coin event, Cambridge Analytica had been busy behind the scenes, emailing potential partners and investors as well as making arrangements for all-expenses-paid trips to the glitzy Macau shindig, according to the report.

Chakrit Ahmad, CEO of Dragon Corp., denied reports that Wan was financing the casino project, telling Business Insider that Wan “came to the event introduced by someone else as a prominent figure in Macau… He is not involved in Dragon and he is not financing Dragon in any way.”

In March, Dragon struck a deal with South Korean casino operator Grand Korea Leisure (GKL) to incorporate the ERC20-based Dragon blockchain platform and its Dragon Coin crypto token in VIP gaming rooms at GKL’s three Seven Luck-branded casinos. Dragon’s business model is based on reducing the estimated 5% charge that junkets pay to move funds from mainland China to regional gaming hubs such as Macau, while junket customers will shell out anywhere from 5-7% to repatriate their winnings.

Aside from Dragon Coin, Cambridge Analytica has also been reportedly on the verge of initiating its own ICO—before the Facebook scandal broke out. The data company made headlines early this year following reports that it had worked on a number of high-profile election campaigns, including the 2016 United States election where Donald Trump emerged victorious.

According to Reuters, Cambridge Analytica had already started discussions with a company that advises on how to initiate and set up ICOs. At present, it is not known whether the data firm is still actively pursuing this path, which would’ve allowed it to raise as much as $30 million.

A Cambridge Analytica spokesperson told the news outlet that the company has been “developing a suite of technologies to help individuals reclaim their personal data from corporate entities” in a bid “to have full transparency and control over how their personal data are used.”

“We were exploring multiple options for people to manage and monetize their personal data, including blockchain technology,” the spokesperson, according to the report.