The sofa beckons: Husband sends wife to the rail in WSOP tournament

William Shakespeare said it best—all is fair in love and war. However, it’s doubtful that the English playwright ever sat down to play poker against Anne Hathaway. If he had, he might have changed his tune. 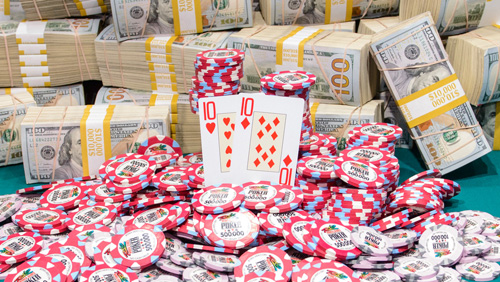 This past Sunday, Tim and Ness Reilly from Massachusetts took part in a WSOP Circuit tournament at Planet Hollywood in Las Vegas. Along with 608 other players, they paid put up the $1,675 buy-in for a chance to take home the $192,152 top prize. As luck would have it, though, they eventually found themselves sharing the same felt which meant drama was just waiting to happen.

The inevitable finally occurred. Tim and Ness had to go against each other in a hand, with Ness sitting on the short stack. Holding an A 10 off-suit, Ness probably felt pretty comfortable with her cards, and pushed all in with her stack of 66,000, according to a CardPlayer report. After giving it some considerable thought—to call or not to call, that is the question—Tim called. At this point, it was too late to turn back.

Tim was holding a pair of 3s—with two over cards, Ness had a fairly good shot at winning the hand. However, the poker gods weren’t listening, and a Q-3-2 on the flop awarded Tim nicely. Ness saw a glimmer of hope on the turn, though, as a 4 was flipped over, but a King on the river denied her the chance of picking up a straight. Ness was sent to the rail in 46th place with $3,248, part of which probably went toward new locks on the bedroom door.

This is actually not the first time the couple has participated together in a tournament. In 2015, they both made an appearance at the WSOP main event, according to reports. Tim was the first to be eliminated in that tournament, sent packing in 360th place. His better half made it a little further, checking out in 244th.