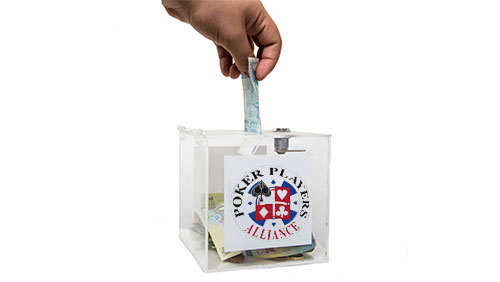 With the Poker Player’s Alliance needing to raise $25k by the end of the month just to survive, Lee Davy shares his opinion on where things may have gone wrong for the institution that’s been lobbying for poker players rights since 2005.

Frank, is a Canadian who works in the philanthropy business convincing people to give him chunks of cash so he can use it to be James Bond.

We were sitting next to each other at the Effective Altruism (EA) Summit in San Francisco waiting for the Hollywood actor, Joseph Gordon-Levitt to take the stage.

William MacAskill, the author of Doing Good Better and the founder of EA, had just finished his speech stressing that 2018 would be the year where EAs had to do good together. Part of the new ethos was this somewhat uncomfortable experience of sitting very close to someone, shaking their hand, and saying:

I told Frank that I had been trying to help people stop drinking alcohol since 2009. I had an online training course. It was £400. I knew it would save lives, but nobody would buy it.

So I asked Frank: “How can I sell my course?”

Frank asked me a few questions about my personal life and what I did for a living. He became interested when I told him that I worked in the poker industry.

“There’s a lot of money in the poker industry, right?” Asked Frank.

“Ok, instead of asking people to buy your course, why don’t you approach philanthropic poker players to buy the courses from you so you can give them away to those in need?” Suggested Frank as Gordon-Levitt sat down, and I lost his interest.

The Poker Players Alliance (PPA) has over a million members, and if they don’t raise $25k by the end of the month, they might go the way of the western black rhinoceros.

Something doesn’t add up.

My business model of finding rich poker players to help out working class addicts is not sustainable. Going all Oliver Twist has a shelf life, as the PPA is finding out.

I need a new plan.

So does the PPA.

We’re the most connected race of humans in history, and yet we have never been further apart. You could be standing in the bank waiting to beg someone for an overdraft, someone could rob it, and your head would never leave your mobile phone.

It’s not easy to capture someone’s attention these days. It’s even harder to keep it once you have it. I’m talking about engagement. I am one of the million PPA members. I don’t feel engaged.

With engagement so tricky, we all need to be expert marketers or hire an expert marketer. The PPA has two functions. The first is lobbying. For this, you need people who understand the political system. John Pappas and Rich Muny are perfect in this regard. The second is to engage with their members so they will provide them with funds. Seth Godin and Bernadette Jiwa are exceptional in this regard.

Real marketing is at the very essence of what you do, and if you choose to do your thing in poker, you had better do it well. During the PokerStars Caribbean Adventure (PCA) I sat down with Igor Kurganov, someone who has similar issues to the PPA in his role as founder of Raising For Effective Giving (REG). I suggested to Kurganov that it was becoming easier to raise money through poker players, and the high roller quickly put me right.

“Right now it’s a tougher environment,” said Kurganov. “The ‘earn’ a player has over a year is much smaller than it used to be. Players are looking more closely at what they can give. Even in my group, for example, back in 2011 everyone would want to buy dinner. Then around 2013/2014 everyone was earning less, and over time we were flipping for the bill. Now we’re writing it all down.”

Marketing is the by-product of your actions organically matching your mission and your values. It’s also about great storytelling and producing the goods.

The PPA has been advocating for the legalisation of online poker in the US since 2005. 13-years later we have a fully-regulated and legal market up and running in only three states, with Pennsylvania in motion. With results like that, it doesn’t matter if those in the corridors of PPA power think it’s a success, you’re going to need an Oscar-winning story to get players to donate.

Going back to my time at the EA Summit, I felt a mixture of emotions. On the one hand I felt confident that there existed a bright group of youngsters determined to make the world a better place for my children. But when I sat down and spoke to them, each conversation was devoid of emotion. There was no electrical charge. No connection. No emotion.

It’s for this reason that REG seems such a logical solution to rational and logical thinkers, but those looking for an emotional connection will run to the Oxfam laden hills.

Perhaps, those same rational thinkers look at the PPA and can’t see a hope in hell. With poker players programmed to look out for number one. Doesn’t it make sense, that without a rational reason to donate based on previous results, and without effective story-driven marketing, the players will get on with life without fully regulated online poker rooms in the US?

The PPA needs to hire some storytellers.

The only problem is a good yarn takes time to leave the mouth and enter the heart. Patience and organic growth is everything. You need to build trust through your plotlines.

If the PPA needs to raise $25k in a month, just to exist, time has already run out.