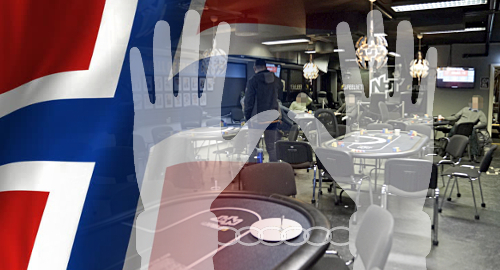 Police in Norway have launched a major action against illegal poker clubs in Oslo, as the country continues to crack down on gambling that doesn’t bear the government’s seal of approval.

On Thursday, Norwegian media outlet Aftenposten broke the story that around 100 police had staged simultaneous raids against five underground live poker venues in the capital Oslo. The action, which took place around 10:30pm local time, is without precedent, at least in terms of scale.

The five clubs raided were identified as Quads, Sentralen, Fish Club, Akerselva Club and Norwegian Poker Team. All five have been closed. Other clubs in the city are reportedly targeted for future raids.

Norwegian law allows individuals to organize gambling parties in private residences, provided the activity is not being run as a business, with the house taking a cut. Green claimed that police had observed “high turnover” inside the raided clubs and that the goings-on went “far beyond what has been granted permission under the Lottery Act.”

The Dagbladet news outlet reported that four of the five arrested individuals are accused of violating the Lottery Act, while two are suspected of ‘gross economic crime.’ A source claimed that four of the five clubs had been paying protection costs to local gangs to ensure their smooth operation, and that the police action was at least partly intended to deprive the gangs of funds.

Green claimed that police had been alerted to the clubs’ alleged illegality by the Norwegian Gaming Authority (NGA), which has led the charge to prevent local punters from wagering with anyone other than the state-owned Norsk Tipping and Norsk Rikstoto gambling monopolies.

The NGA’s anti-gambling efforts to this point have primarily been focused against internationally licensed online gambling operators, including choking off the flow of funds between these sites and Norwegian punters, and making plans to restrict the sites’ ability to advertise with Norwegian media.