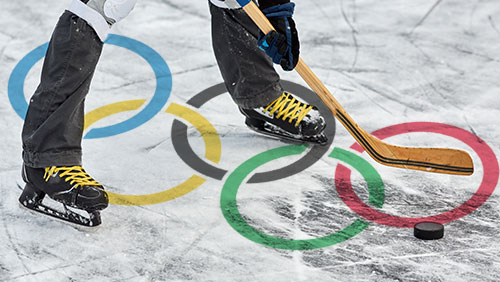 This is a guest contribution by T.O. Whenham. If you would like to submit a contribution please contact Bill Beatty for submission details. Thank you.

It’s strange times at the Olympics — at least when it comes to the men’s hockey tournament. We have been spoiled by seeing the NHL players in the games for the last several editions of the Olympics, and we have seen some of the best hockey ever played on the planet as a result. The NHL got greedy and ridiculous, though, so they stayed home this time. And that means that we are left with a tournament of leftovers, spare parts, and old NHLers who can’t hack it anymore.

It still should be entertaining hockey, but it’s a bit of a handicapping nightmare. When the games were full of NHL players we knew who they were and how good they were, so we could handicap effectively. Now, though, we have less direct knowledge, and we must speculate far more. And speculate we will.

There are 12 teams in the tournament, but only six that are legitimate contenders. And all six are capable of winning if they get all the breaks. Here’s a look:

OAR (+100): Canada has won the last two gold medals. Both times all 25 players on their roster played in the NHL, the best league in the world. This time, the team formerly known as Russia features all 25 players from the KHL — the best league in the world that is eligible to play in this tournament. This is the only team exclusively made of KHL players, so by logical extension it is the most talented team.

There is more than that, too. For players from North America the KHL is where you go when you can’t hack it in the NHL anymore. For many Russians, though, the KHL is more appealing than NHL — the money can be better, and the language and culture are familiar. Other teams have KHL players on their roster, but the don’t-call-them-Russians have generally better KHL players.

This is a very talented team. It’s also one dealing with massive pressure. The Russians have not won a medal at the Olympics since 2002. For a proud hockey country that’s wildly embarrassing.

If they don’t pull this off this time around with the odds stacked in their favor then they may all earn one-way tickets to Siberia. This is a tough team to root for, and their history makes them tough to trust on this stage, but they are legitimately favored here.

Canada (+300): As a Canadian, my national pride is high, but I really can’t figure out what to think of this team. There is no one younger than 25, and they are made up of a little of everything — KHL players, AHL guys, former NHLers washed up after long careers, former NHLers who never really had careers, European league journeymen, and so on. There are nice stories — guys like Gilbert Brule and Brandon Kozun who were scoring machines in junior hockey but never clicked in the pros.

This will be an easy team to root for — especially if they start playing well out of the gate. But they would be tough to trust at this price. It feels like a boom-or-bust scenario for this team. They could rally together and beat the Russians, or they could look old and slow and fall out of the medals. Neither outcome would be surprising.

After two tournaments where the Canadians were truly dominant, I guess this version is more interesting for some people. I kind of liked being the unbeatable force more, however.

Sweden (+400): Rasmus Dahlin is only 17 years old, but he is the single most exciting part of this tournament, and there is no close second. He is a stone-cold lock to be the top pick in the upcoming NHL Draft, so this is a very rare chance to see a guy like him play against men with high stakes before he gets picked. He’s tabbed to be an NHL superstar, and a strong performance here will only increase the tanking at the bottom of the NHL standings.

Dahlin is not alone, with decent talent all over the lineup — much of it familiar to NHL fans. They were silver medalists last time around, and I expect them to add another medal to the trophy case.

Finland (+600): The Finns have become a talent factory for young players recently, and the best part of watching them in this tournament will again be the youth. Miro Heiskanen went third in the 2017 Draft, and Eeli Tolvanen was a first-rounder as well. They both have the potential to be NHL stars, and this will be a good chance to see what they are made of and where they are at.

They aren’t the only interesting players on this team, however, and are not the biggest stars. This team is balanced, and they have a high level of familiarity with each other — more than the North American squads, for example. If they can get good goaltending — which is something Finland is used to getting, then they are definitely a medal threat. The price is fair.

Czech Republic (+900): It’s a shame that Jaromir Jagr decided not to play in this tournament, but this is still a talented team loaded mostly with KHL players. They don’t have quite the depth of some other teams, and they lack a true superstar-caliber player, but there is value in this price. They feel like a bit of a forgotten squad.

USA (+1000): I wish I had better news for any Americans reading this preview. Brian Gionta is the face of this team, and he’s 39. Beyond that we have a collection of has-beens and never-beens. No other team is made up of such an odd mix of spare parts.

Talk to an American hockey fan for more than 12 seconds and you’ll hear about 1980, so obviously anything is possible. At this price, though, I would struggle to justify any bet at all unless you are betting purely with your heart.